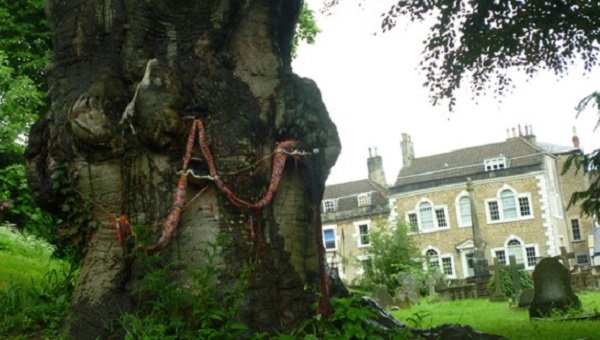 An ancient tree in Frome has been felled and put through a wood chipper after  the council deemed its continued existence to be unsafe. The felling has caused controversy in the community.
King Street and Vicarage Street were closed off in order for the copper beech tree in the churchyard of St John the Baptist’s church to be felled.

The ancient landmark had been suffering with a fungal infection caused by Ganoderma, commonly known as white rot, for many years and had been regularly monitored by council officers. To prevent the risk of injury to passers-by or damage to the nearby buildings, Mendip District Council decided to fell the landmark, deeming it to pose an unacceptable risk to public safety.

Claire Brown, 27, was upset to witness the felling, stating its presence was always perfect photo opportunity. She explained: “When walking in the sunshine it has always been a lovely photo opportunity because it’s such a big beautiful tree. It changes so many colours throughout the year that it’s a photographer’s delight.

“They say it has a disease so of course it should be cut down because it’s a danger. It’s sad because it’s so very old and the trees in this part of the world are what make it so lush.”

Stuart Finney, team manager for Operational Assets, said: “We’ve been monitoring this tree for 11 years since we first noticed the Ganoderma in 2005 and have tried various methods in this time to extend the tree’s life, such as reducing the tree canopy, but unfortunately the decay is now too far spread.”

Cllr John Parham, Portfolio Holder for Finance, Governance and Public Spaces added: “It’s a real shame that this tree which has been standing for hundreds of years has to come down, however the public’s safety is our number one priority.

“A replacement tree has already been planted in the graveyard and although this doesn’t replace the large old Copper Beech we hope it will help mitigate the felling. We are also in talks with local interested groups who may be able to use the healthy wood from the tree to create items for the community.”