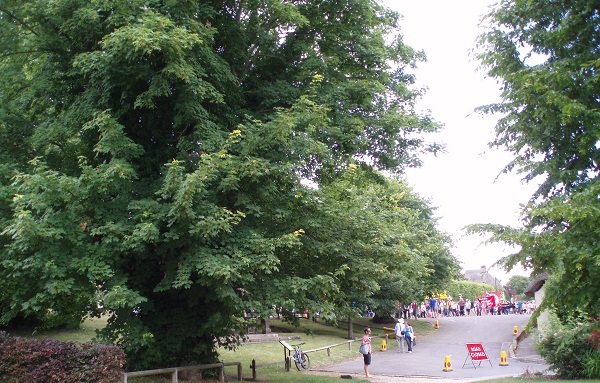 Each month we feature an ancient British tree. This month the Ancient Tree Forum introduces us to the Tolpuddle Martyrs tree.

It was under this sycamore tree in Dorset that six agricultural labourers, who later became known as the Tolpuddle Martyrs, met in 1834 to form the first trade union in Britain. It was very common at that time for meetings to take place under village trees and the sycamore on the green in Tolpuddle would already have been a good size.

The struggle of the Tolpuddle six to improve the conditions and wages of their fellow farmworkers led to their arrest and the men were charged under the Mutiny Act and transported to Australia. Three years later, after many petitions and protest meetings the government allowed the men to be returned to Britain and they were able to spend the rest of their lives in their home village. The iconic sycamore and this little village of thatched cottages are still associated with the trade union movement and are a place of pilgrimage for trade unionists and socialists. Every July at the Tolpuddle Martyrs’ Festival, thousands take part in a march and rally.

The National Trust manages this special heritage tree to try to increase its longevity. It is pollarded on a regular cycle to reduce weight on the branches and as a result, growth in the crown is vigorous and healthy. Metal cable bracing was put through the hollow trunk in the 20th century to hold together the thin shell of living sapwood and a former split in the trunk has now grown over.
It is hoped that with careful management the Tolpuddle Martyrs Tree will continue to grow for at least 200 years more. Its successor is already in place on the other side of the green, planted from a seed taken from the original
sycamore.
The Ancient Tree Forum champions the biological, cultural and heritage value of Britain’s ancient and veteran trees, and provides advice on their value and management at www.ancienttreeforum.co.uk.