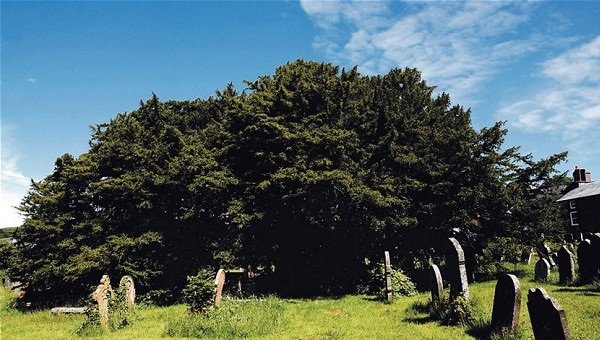 A yew tree in the corner of a Welsh churchyard is said to be 5,000 years old. Our Neolithic ancestors were as fascinated by it as we are.

Some years ago, I happened to phone the late Duke of Buccleuch, famous for his love of forestry – which he was in a good position to practise, owning several large estates in England and Scotland. He was about to make a pilgrimage, he said, to one of the oldest living organisms in Europe. It was to be found in the churchyard of Fortingall, a thatched Perthshire village rebuilt in the Arts and Crafts style at the beginning of the 20th century: the Fortingall Yew.

I went there myself shortly afterwards. The yew stands walled off, in its own compound – a testament to the respect inspired by a relic whose age is calculated not in decades, not in centuries, but in millennia. The Duke thought it could have been as much as 5,000 years old. “I never cease to marvel,” he said, “that there is something living today that was three thousand or more years old at the time of the first Christmas.”

Now, though, there’s another contender for the crown of extreme arboreal antiquity. Some tree experts have identified a rival to the Fortingall Yew in Defynnog near Sennybridge, in the Brecon Beacons National Park. The Welsh Marches are well supplied with old yew trees, as is the south-east of England, where they sometimes grow wild. Studies of tree rings and carbon dating have suggested to some scholars that the yew at Defynnog was a sapling during the early Bronze Age.

At which point we must take a deep breath, and remember that the dating of ancient trees is notoriously tricky. Carbon dating depends on finding a fragment of the oldest part of the tree – and ancient trees are generally hollow. The Fortingall Yew, for instance, is less a single, three-dimensional trunk than a two-dimensional ligneous wall. Its essential treeness has, in a way, disappeared, to be replaced by feelings of wonder and awe.

Old trees rot from the centre; ancient oaks are invariably hollow. In addition to which, Jill Butler of the Woodland Trust tells me, “yews sucker. It could be that we are looking at suckers from an earlier tree, now disappeared, which is genetically identical to the original but not truly to be called the same tree.” A similar phenomenon can be observed at Woolsthorpe Manor in Lincolnshire, to which Sir Isaac Newton retreated to escape plague in Cambridge. The apple tree under which he was sitting when the theory of gravity leapt into his brain became celebrated; so much so that, in the 18th century, it was cut down to make souvenirs. A section of the trunk was discarded and – behold! – took root. It can now be seen growing as part of a tree with, for some of its length, a peculiar, ground-hugging bent. It isn’t quite Newton’s tree, so much as a clone.

Tree-ring dating runs into the same problem of hollowness. It is possible to analyse rings from a fragment of tree and extrapolate from the result; but the conclusion may be far from exact. What we can say is that yew trees grow to a great age, as can be seen from the hoary old veteran at Crowhurst in Surrey.

Like other very old beings, the Crowhurst Yew needs a degree of support and now its limbs rest on wooden crutches. But the tree is still capable of putting forth a great bush of green in due season. At some point, perhaps in the 18th century, somebody put a door in it (that was presumably before another fissure opened up in the trunk, allowing visitors to ignore the door and step through elsewhere). I suspect the local publican; he was charged with looking after the tree.

The experience of walking inside it, though, is astonishing. With all the soft wood worn away, the walls look as though they are part of a grotto, formed by lava that has solidified. Even in Charles I’s reign, the girth measured 10 yards; 400 years later, it is a few feet bigger still. In 1820, a cannonball was found in the trunk: the tree had absorbed it, presumably during the Civil War, and carried on.

Girth is not by itself a guide to the age of a tree. Jill Butler recently looked at some of the “cliff yews” clinging to the limestone cliffs above the picturesque Welsh town of Llangollen. Cliff yews may be scrawny and stunted, but are “very, very exciting”. With so little to feed them, they grow very slowly, so that hundreds of rings can be measured in the space of a few centimetres of trunk. Each ring represents a year of growth; so these gnarled and stunted specimens date at least to the Tudor period, in some cases far earlier.

Robin Bevan-Jones, in The Ancient Yew, makes a connection between one ancient Welsh yew and pagan kingship rituals. It’s easy to see why yews were regarded as sacred. They are evergreen. Their bright red berries are poisonous – and yet they also have the power to regenerate. Gardeners know that yew hedges can withstand even the most merciless cutting back and recover as though nothing had happened to them. Dropped branches can form new roots and grow into trees when they touch the ground. Indeed, beams made of yew may even sprout again, long after they have been built into houses.

As a result, yews acquired mystical properties. Their dense, dark green shade adds an appropriate note of sobriety to the churchyards in which it is traditional to find them; they were associated with the Resurrection. The 12th-century Welsh historian Giraldus Cambrensis describes the yews of Ireland, found in “old cemeteries and sacred places, where they were planted in ancient times by the hands of holy men to give them what ornament and beauty they could”. But the Fortingall Yew and Defynnog Yew were growing long before the churches to which they are adjacent were raised.

Yews were revered in pre-Christian times. In Trees in Anglo-Saxon England, Della Hooke notes that Romano-British burials have been found near to an ancient yew at Claverley in Shropshire. There are many more examples, although she warns that “no direct association [can be] proved”. Some ancient yews may have been planted by the earliest Christians to mark the position of hermits’ cells. At Hope Bagot, beneath Brown Clee in Shropshire, is one of the many yews in Britain associated with holy wells; nourished by the water, the Hope Bagot Yew has grown to a great size. Yews have entered gazetteers through names such as Ewhurst in Surrey, Ewshot in Hampshire, Uley in Gloucestershire and many other derivations from dialect.

Whatever the yew’s spiritual qualities, our forefathers remained fully conscious of its practical value. Yew was flexible. In 1314 Robert the Bruce won Bannockburn with the aid of longbows made from the sacred yews at Ardchattan Priory in Argyll. Yew was also the wood of choice for the English and Welsh longbow, which proved to be so devastating against the flower of French chivalry in the Hundred Years War.

The demand for yew wood exhausted the home supply, so that in 1492 Parliament decreed that every ship landing in an English harbour had to import at least four yew bows for every ton of freight. It was also used for barrel hoops, the stocks of whips, small tool handles, axles, wheels, the bodies of lutes and decorative inlay on furniture.

All fine uses. But consider again those ancient trees – we need an adjective such as numinous to dignify the Pulpit Yew at Nantglyn, in the hills of Denbighshire, part of whose hollow trunk serves as a pulpit, reached by stone steps. Or the two trees that survive at the Cistercian Abbey of Strata Florida, in Cardiganshire (Ceredigion) – a male and female to survive from the 39 yew trees that surrounded it in the Middle Ages. Nevern, in Pembrokeshire, has its Bleeding Yew, out of which blood red sap oozes from a wound six feet from the ground; Aberglasney in Carmarthenshire its Yew Tunnel, formed by a series of trees that have been bent to form arches. All are examples from Wales.

Wales! A land of myth. Who knows if even the Defynnog Yew isn’t trumped? Janis Fry, one of the tree experts who has dated it, has written, with Allen Meredith, The God Tree, which, according to the blurb, “reveals the yew tree as a life-form of earth-shaking importance, both literally and symbolically”. Yews, the authors contend, derive from cuttings from the original tree of life, some of which were taken to the British Isles “where some of them can still be seen growing to this day”.

At which point a Welsh mist descends. One of the wonder-working properties of the yew is its capacity to stir the human imagination.