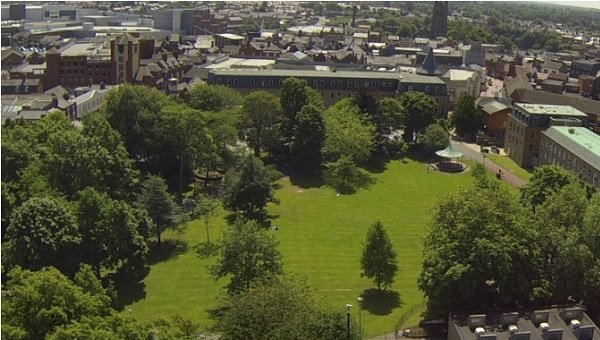 Ambitious plans to increase the urban tree cover in the County Borough across the next ten years have been backed by councillors.

In a report presented to Wrexham Council’s Executive Board yesterday it was recommended that members approved the Draft Tree and Woodland Strategy in order to progress forward with plans to increase urban tree cover across the county borough.

The report outlines plans to plant more trees to help in terms of climate change, pollution, flooding and biodiversity. Plans to protect existing trees and ensure that any future trees are planted in the right locations are also detailed within the new strategy.

Speaking at yesterday’s Executive Board meeting, Lead Member for Environment and Transport, Cllr David Bithell noted that the ‘Tree and Woodland Strategy 2016-2026 outlines ambitious targets to increase urban tree cover in the County Borough to 20% over the next ten years’.

Cllr Bithell added: “Wrexham County Borough Council’s average tree cover is currently 20%, but this figure covers a wide variation across the urban areas – with Coedpoeth having 6% tree cover, Wrexham Town Centre 13% and Cefn Mawr 24%. The increase in tree cover will be achieved by ensuring the correct policies are in place in terms of planning.

“The strategy also sets out the need to protect existing large trees and ensure that when planting new trees they are in the right locations.”

Details within the report also note that the strategy was largely supported during a recent consultation, with 81% supporting the Council’s overall aim of increasing tree coverage.

With regards to Council owned trees, the strategy notes that they will be ‘managed appropriately and according to defined policies and where possible grant aid will be used to manage and improve existing public woodland’.

However questions were asked on what can be done to protect trees on private property, with Cllr Michael Williams querying if the number of TPO (Tree Preservation Orders) will increase.

Cllr Williams said: “Most as far as I am aware are not council owned, they are on private land. Will it be the intention of the strategy to ensure trees on private land are protected or will we increase the protection?

“What actions are protected for unauthorised felling of trees on private land, as it does happen.”

Lead Officer Elton Watson said: “It’s a strategic document between environment and planning, it looks at trees on private land and improving protection and we deal with them through the planning process. Not just solely looking at issues with Council owned trees, does look wider.

“Where there is evidence to support prosecution the Council will consider that. Where necessary will prosecute and get replacement trees planted.”

Questions about where future trees will be planted were also raised, with concerns that previously trees have been planted in the wrong location and have caused issues.

Cllr Bob Dutton said: “Like to make it clear that on occasions trees can be quite an nuisance as far as members of the public are concerned. Very often when they are close to houses, the roots have been allowed to extend causing damage to properties.”

However Cllr Andrew Bailey later pointed out: “It could be that trees aren’t in the wrong places and the houses are. A few more trees in upland places might have reduced the devastation some houses saw over the Christmas period.”

Cllr Bithell noted that when it comes to planting future trees they need to be planted in the right location.

Members of the Executive Board unanimously approved the Tree and Woodland Strategy.