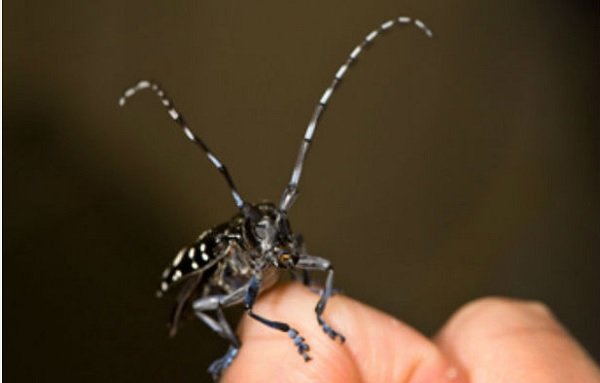 That was the message from the Forestry Commission, which called on importers to comply with tough new regulations at British ports, to stop the country’s woodland and wildlife being devastated.

The Commission, which has its National Arboretum at Westonbirt in Gloucestershire, said it fears importers are trying to bypass the regulations because it costs them time and money, but the results could be disastrous for our natural habitats.

Already the authorities had to lay waste to an entire stretch of the countryside, felling 2,000 trees in an area of Kent after larvae of the Asian Longhorn beetle escaped from wood docked at a nearby port and established itself there.

They felled the trees and all the surrounding woodland to try to stop it spreading, fearing the creature would do untold damage as an invasive species.

Insects like the Asian Longhorn arrive as larvae living in wood that is used in packaging of goods or as ‘dunnage’ – loose wood to support cargo. There are strict international regulations for the standard of wood packaging – it must be treated and marked as such.

The risk of larva escaping from untreated wood grows massively as warmer weather approaches, and the Forestry Commission’s welcomed greater funding for inspectors at ports that meant last year there were 122 ‘interceptions’ of wood packaging that broke the regulations last year alone – once every three days on average – and some of it was found to contain invasive species.

“The first line of defence for our trees and forests is to keep harmful pests and diseases out of the country,” said John Morgan, the head of plant health at The Forestry Commission.

“We can increase our chances of finding non-compliant material by doing further targeted surveillance work to check on the compliance of imported wood packaging material.

“This is costly and inconvenient for the importer and we would much prefer that any wood packaging material was fully compliant,” he added.

“Some of the interceptions last year found that wood packaging material and dunnage were often carrying live insect pests and had to be destroyed, treated or re-exported.

“The national plant protection organisations for the exporting countries have also been informed and asked to take steps to ensure that exporters are made of aware of and comply with the regulations,” he said.