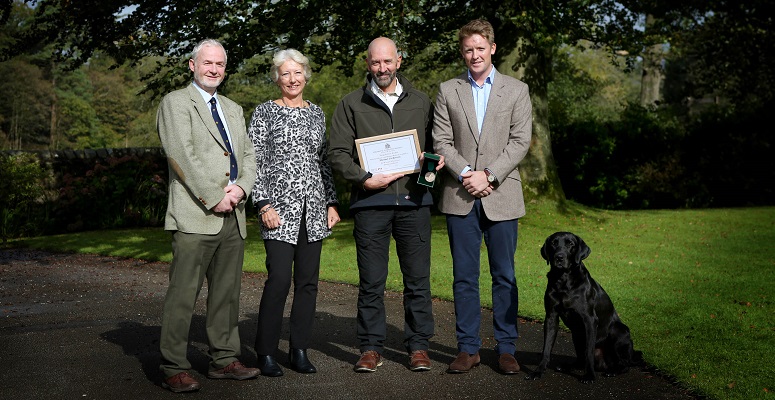 The head forester of the Abbeystead Estate in Lancashire has been rewarded for more than 40 years’ service to the profession by the Royal Forestry Society.

Mick Dickinson, of the Abbeystead Estate, received a medal and certificate for his service to both the estate and woodland management, improving its safety and quality, for conservation of the landscape, timber production and as a habitat.

Mick, aged 60, began working at Abbeystead in the 1970s under the stewardship of the Earls of Sefton before rising to the role of Head Forester after it was bought by the Trustees of the Grosvenor Estate in 1980.

“There’s no comparison between 40 years ago and now,” said Mick. “The industry is a lot more progressive. At Abbeystead we have a long-term management plan and there is a lot more planting. You can see the positive impact we’re having on the landscape and the environment. It’s very satisfying when you can see the results of your day’s work. In years to come, I’ll be able to show my grandchildren and say I planted those trees and managed that woodland.”

As well as managing the estate’s forestry, firewood and biomass fuel businesses, throughout the years Mick and the team have rescued injured dogs, lost walkers and regularly engage with the public about the importance of woodland management.

Neil Kilgour, Agent, Abbeystead Estate, said: “Mick is a fantastic ambassador for sustainable woodland management, the forestry industry and for the Abbeystead Estate. He fully deserves this recognition. It is the aim of the estate to contribute to the social, economic and environmental wellbeing of the communities we are part of, and Mick has personified this throughout his career.”

Abbeystead is situated in an Area of Outstanding Natural Beauty (AONB) and more than two thirds of the estate is designated as a Site of Special Scientific Interest (SSSI) and a Special Protection Area (SPA) for its rare habitat and the flora and fauna it supports.

The estate brings a sustainable approach to the stewardship of land, property and the environment, increasing biodiversity. It is home to some of the strongest populations in the UK of red listed species such as curlew and lapwing.