A seminar with Duncan Slater and Andrew Hirons 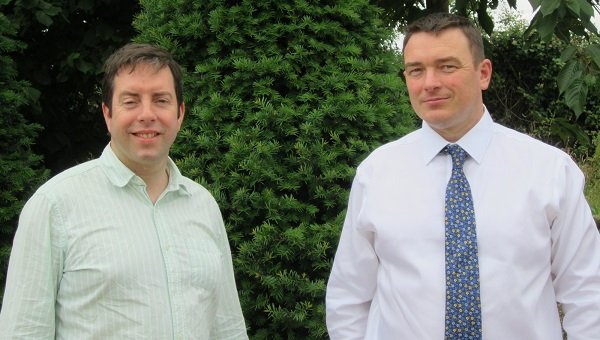 Delegates at the latest seminar to be held at Barcham Trees’ Cambridgeshire nursery were given plenty of food for thought from the entertaining Myerscough College lecturer-team of Duncan Slater and Andrew Hirons. Duncan is about to submit his PhD thesis on forks in trees to the University of Manchester, finally coming to the end of a six-year part-time study. After a morning’s presentation given in his highly individualistic style, there was no doubt about his ability as a superb communicator and, I suspect, very little about whether he is soon likely to be termed ‘Dr Slater’.

He began by asking how we can gauge how problematic bark inclusions in tree forks can be. Much of his PhD work has focused on this, and its outputs include a new anatomical model for branch attachment, proof to support the model, an assessment of bark inclusions, the effect of induced defects and wind-induced movement. His tree of choice in this work was hazel, thanks to its mid-density and ease of replication.

In discussing his new anatomical model, Duncan reminded us of Schopenhauer’s belief that truth passes through three stages – ridicule, violent opposition and acceptance as self-evident – and pointed out that the earlier model was not based on evidence and lacked scientific support. His study found that the wood formed at the forks in trees is tougher and denser than elsewhere. When we grow upright cultivars close together, sheltering them while they are young, and fail to thin the woodland early enough we encourage the development of inclusions. While inclusions can be defects they are not necessarily flaws, but we need to examine our practices to minimise this. Duncan Slater believes previous studies into this have not been deep enough to find these facts.

He went on to give his views on arboricultural science, starting with the belief that a degree in arboriculture is becoming a standard qualification for the arboricultural industry. He mentioned the Myerscough MSc course now incorporates more science-based modules, while tree conferences now often include some scientific experts among their speakers. For too long, opinion and science have been accorded the same weight, and he also dislikes the overly strong culture of our veneration of personalities of the tree world. It saddens him that many of the findings of plant science are never communicated to arborists. Too often models are not contested and opinions are not challenged, he told his audience. He quoted the example of the Compartmentalisation of Decay in Trees (CODIT), which comes from the 1960s and 1970s and does not have the all the answers because there was only limited science behind the model.

The decay process is easiest when it passes up and down existing channels in the grain of trees. A better model may be one of a ‘spreading acid’ he suggested. The acid model for decay starts from the perspective of the fungus/host interaction rather than the tree’s defences. It takes into account the endophytic fungal colonisation of trees. This does not conflict with the key findings for the reaction zone or CODIT models, but will be an improvement on them. He believes its much-needed potential use will be in the modelling of the decay process in standing trees.

Duncan then looked at the arguments against the axiom of uniform stress, which says the tree is a self-optimising structure because the growth of new wood tends to eliminate any stress concentrations, maintaining a uniform stress distribution. But can the axiom be defined, he asked? To what does the tree respond? What is its average daily working load? When are the stresses uniform? Are the stresses uniform when the tree is still or when it is in motion? If stresses were uniform, the weakest material would always fail. He then went on to ask whether the materials throughout a tree’s structure are capable of coping with an equal amount of stress? These were just a few of the ‘challenge questions’ with which Duncan pounded his audience!

Compressive stresses concentrate on the inside of a curve, tensile stresses on the outside of the curve, at the apex. Duncan feels the idea of a uniform stress at the outer edges of a tree is a flawed concept. For example, the wood at junctions is adapted to take greater stress. Concentrations of stress are a major driver behind the failure of tree parts, and Duncan believes this is the direction into which future research should head. For him, the axiom of uniform stress is an example of incorrect thinking.

Attention then turned to tree autotoxicity, the action by which a tree can kill the same species using chemical attack in order to ensure it has the space it needs to grow. Duncan suggested it was often the wrong practice to plant a tree under a canopy of trees of the same species, and expressed the belief that one day we may re-categorise trees according to their autotoxicity. None of this is yet in forestry textbooks, yet the effect can be seen in many temperate woodlands.

Moving on to look at containers in which trees are grown, Duncan told us that current pot shapes are a cultural rather than an arboricultural matter. He feels shallow, disc-like containers can produce better growth than those currently in use.  “Arborists are not critical enough of nursery stock. Nurseries should produce what arborists want, not what the nurseries want to sell them”, he said.

Duncan’s colleague Dr Andrew Hirons led the afternoon session on the subject of urban forest resilience through species selection. He began by telling us the ancient Egyptians bought trees for their frankincense (Boswellia), but the trees tended fail after being transplanted. Today failure rates range from 10 to 80 per cent within a year of planting. The average young tree mortality rate in the UK is around 25 per cent, while urban trees have an average life expectancy of between 19 and 20 years (Roman and Scatena, 2011).

Andrew told us that in Sacramento County, California, there is now a move to plant more drought-tolerant trees. So why are water use and drought so important to urban trees? A lysimeter can tell us how much water a tree uses by measuring the amount of evapotranspiration. There are large variations according to climate, leaf area, species and the availability of water. He also considered the matter of root-soil coupling, where roots need to mix successfully with the soil in which they are expected to grow. Restricted soil volumes and impermeable surfaces result in water deficits being major physiological stress limiting the performance of urban trees..

“Trees generally die either of carbon starvation or by hydraulic failure”, he continued. “Trees need hydraulic integrity in order to provide ecosystem services. Trees can either avoid or tolerate water deficit. They can avoid it by maximising their acquisition and reducing water use”.

Andrew then went on to consider the drought tolerance index for trees. It seems likely that drought-tolerant species are likely to make good street trees, and we should be more intelligent how we select them for this purpose. The question of why is there inherent variation in tree growth rates was the next delegates were asked to consider. Andrew suggested the variation in their photosynthetic capacities may be a reason. Specific leaf area is linked to a tree’s relative growth rate.

Throughout the day there was considerable interaction between the two speakers and the 60 delegates. Once again Barcham Trees attracted stimulating, forward-thinking experts to share their knowledge and the results of their research with a receptive professional audience.