Removal of iconic trees branded an act of ‘environmental vandalism’ 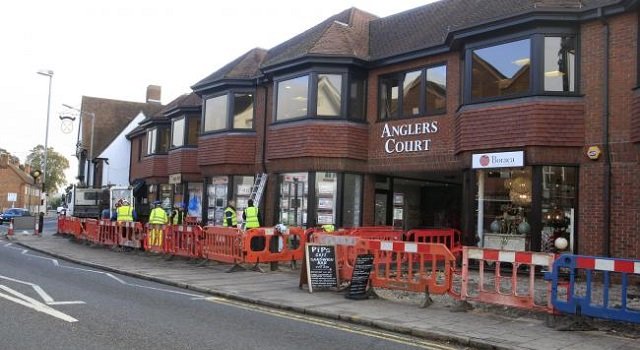 The removal of a row of iconic trees in the heart of Marlow by developers have been branded an act of “environmental vandalism” by a campaigner that fought to protect them.

Residents are mourning the loss of the trees at the “gateway” into the town, Anglers Court in Spittal Street, as workmen moved in to carry out controversial planned improvements to the area.

The plans, put forward by Sorbon Estates, include the removal of four well-loved trees and alterations to shop frontages on the busy road.

Workmen have now taken out the trees and are preparing to lay new granite paving, before planting three new trees with circular benches.

Shops at Anglers Court will also be given new timber frontage with “complementary signage and uplighting to further enhance the area.”

The proposal forms part of the new £100,000 Spittal Street improvement programme – a raft of upgrades being planned alongside Wycombe District Council and Marlow Town Council.

However, the plans have long criticised by some residents, who said the removal of the trees was “unacceptable”.

Architect and Marlow resident, John Burnham, who has “vigorously” campaigned against the plans in the past, said the improvement work is like “vandalism”.

“Buildings like Anglers Court are quite unique. There are very few first class buildings from post-war Britain left in Marlow and Anglers Court is one of them. It stands among the best in in the country and it is about to be vandalised.

“The Marlow Society took a strong line on this and I have campaigned vigorously against these plans.”

Tamra Booth, managing director of Sorbon Estates – part of Shanly Group, reassured residents that despite the closure of Marlow Bridge, the Anglers Court improvements would not affect traffic through the town.

She said: “We would like to thank local residents and businesses for their patience as we carry out the improvements and want to reassure them that none of the works will affect traffic flow through the town.

“Completion is anticipated for the end of November and we hope that everyone will enjoy the new streetscape at this gateway into Marlow.”