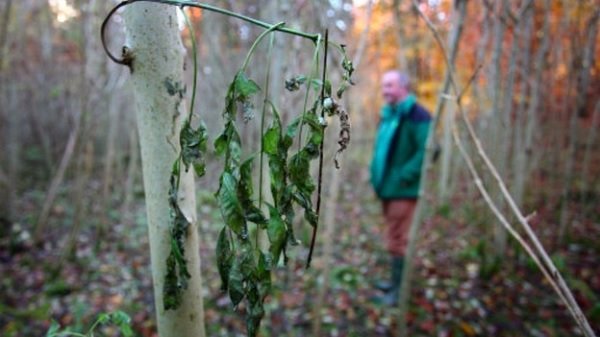 Some 86,000 young trees have been destroyed to prevent the spread of ‘Ash Dieback’ into the wider environment, according to the Department of Agriculture and Rural Development. “Over 3,000 site inspections have been carried out since the disease was first found here in November 2012,” said Agriculture Minister Michelle O’Neill. “To date 93 sites have been confirmed with Ash Dieback infection. Of these, 90 were recent plantings around the province, with three findings on imported stock in trade. There have been no confirmed reports of C. fraxinea infecting mature ash trees in the north.”Minister O’Neill has encouraged landowners and the public to be aware of the symptoms of the tree disease and report any sightings to her Department.The announcement follows an all-Ireland joint conference on Chalara Ash Dieback in Dundalk in May of this year.“The common ash (Fraxinus excelsior) is an integral part of our local landscape – in field hedges, as a component of woodlands, roadside plantings, and as single mature specimens in the countryside,” a statement from DARD said. “Chalara Ash Dieback is caused by a fungal pathogen (Chalara fraxinea) which causes dieback of young shoots and may eventually lead to the death of the tree.”

Minister O’Neill added: “Forest Service Plant Health Inspectors have undertaken a comprehensive programme of surveillance for the disease.“Surveillance plans for the 2014 season are well underway, with Forest Service Plant Health Inspectors firstly revisiting and inspecting the areas around previously confirmed outbreak sites. Further surveys of both recently planted and mature ash will then be undertaken over the summer period.“While DARD continues to monitor the situation closely and destroy infected plants promptly and effectively, I would encourage landowners and members of the public to continue to help us prevent this disease spreading by looking out for symptoms of Ash Dieback, and reporting them to DARD.”The main symptoms to look out for are:• wilting and blackening of young shoots• loss of leaves from the top of the tree• darker diamond shaped lesion on the bark where the shoot joins the main trunk• fruiting bodies (3-5mm size creamy coloured ‘mushroom shaped structures’) on dead leaf litter during June to October.The first recorded outbreak of the disease in Northern Ireland was in November 2012.