80-year-old trees in Neath torn down for ‘public safety’ 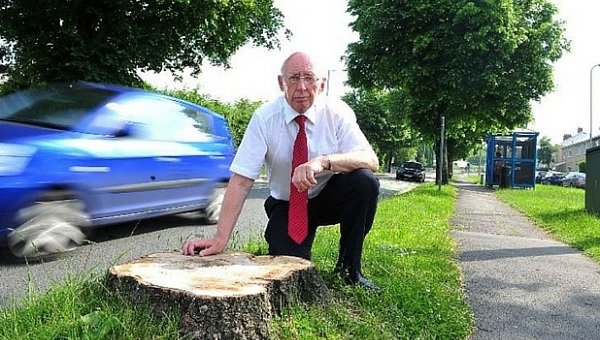 A row of 80-year-old trees in Neath have been torn down to protect the public, after they were found to be diseased.

Tree surgeons for Neath Port Talbot Council discovered that the row of trees on Afan Valley Road, in Cimla, were badly diseased and unsafe before they took the decision to fell them.

Cimla councillor John Warman said that it was sad but necessary that some mature trees had to be cut down in the Cimla on the main road adjacent to Crynallt School.

Mr Warman said: “After an inspection had been carried out, the trees were found to be diseased, and public safety in this area is a priority. This left the council with no option but to cut them down.

“The trees were next to a pedestrian crossing near a bus stop and close to the entrance of Crynallt School and the road is very busy with parents and children walking past the trees and crossing the road to go to the school.”

Mr Warman, who is also Neath town mayor, added: “It is always regrettable when beautiful and majestic trees like these have to be cut down and some residents have told me they had been adding there character to the Cimla street scene for over 80 years, but no chances can be taken once disease takes hold – then public safety becomes the priority.”

He added: “I want to make clear because of concerns about parking at school times and the council hoping to carry out some improvements to area outside the school to improve safety, that the trees were not cut down for those reasons but purely as a result of disease.”

Now there are hopes that the authority will look to replant the trees later in the year.

“It is important to make sure that this part of the Cimla gets replacement trees to maintain the character of this area,” he added.