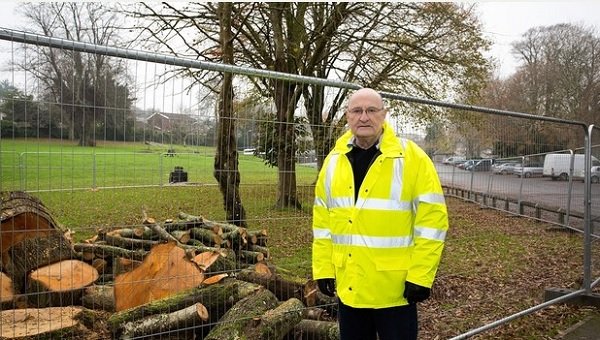 A new woodland began to take shape on the Berryfields estate in Bodmin this week as other trees planted in Priory Park during the reign of Queen Victoria were being felled due to disease.

Members of The Community Volunteers (TCV), from Camborne, yesterday began planting 750 trees on the housing estate after a successful

bid by the Berryfield Community Centre.

Elsewhere in the town, the council has started the felling programme in the park, after some large trees were found to be diseased.

The town council has promised they will be replaced, not with saplings, but with mature broad leaf specimens.

Council staff are carrying out an annual inspection on other areas of land which the council owns to check the condition of trees in the town.

Deputy mayor Lance Kennedy, who is chairman of the council’s property committee, said the park was a very popular open space with residents, and its environment had to be protected.

“We accept that many of the trees in Bodmin were planted by the Victorians, and are coming to the end of their life. However, we are acutely aware of our responsibility to both the aesthetics and health of the town.

“The need for broad leaf trees and their impact on our atmosphere has led to plans for wide-scale planting on a number of areas, and there are other groups currently engaged in the same type of project,” he said.

The two-day planting programme at Berryfields will see a small woodland created near the estate’s community centre, with a variety of saplings planted.

Tom David, from TCV, said his organisation had secured funding from Defra for the 750 trees, and he had approached community groups across Cornwall to make a bid for them.

“The people from Berryfields were particularly keen and enthusiastic to acquire the trees, in fact they were the first group to respond.

“They are a very active community and we are pleased the trees will enable a small woodland to be created on the estate,” he said.