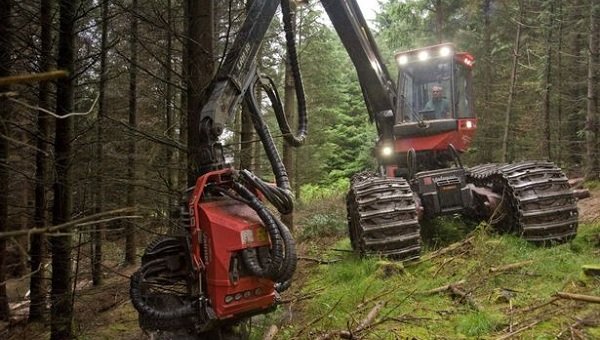 Natural Resources Wales (NRW) has announced 60 full-time jobs will be created in a multi-million-pound contract to supply one of the UK’s largest timber harvesting companies.

NRW said the five-year contract with Euroforest will be worth more than £2.5m to them and an estimated £16m to the Welsh economy.

And the contract guarantees the supply of 50,000 tonnes of larch annually from Coed y Cymoedd Forest near Neath and will secure almost 60 full-time jobs in the harvesting and haulage industries.

The timber will be supplied to a range of existing markets in Wales and the borders with the majority used locally.

The trees are being felled to help slow down the spread of a disease Phytophthora ramorum, which has more than six million larch trees in Wales.

Since the disease was first identified in Wales in 2010, more than 6,000 hectares (14,500 acres) of woodland have become infected, which is roughly around six million trees.

Hugh Jones, head of forest operations, said harvesting and developing new markets for the processing sector is essential for the industry.

He said there will be more larch available over the next 10 years due to the large-scale felling operation.

He said: “This contract is an important step to tackle this disease in Wales and provide more security to the timber industry.

“The challenge for us and Euroforest is significant because of the difficult terrain in this area to enable us to harvest these trees quickly and safely.

“This contract will enable all parties, including staff, suppliers and timber customers, to proceed with confidence.”

More than two million larch trees on the Welsh Government woodland estate have so far been felled.

Euroforest’s deputy managing director Ashley Williams said: “This contract not only secures jobs in the forestry industry but also provides a long-term supply of timber to saw mills and processors, who in turn employ hundreds of people.

“The awarding of this contract allows the local timber harvesting infrastructure to invest with confidence in the future.

“And it will help tackle this disease affecting larch trees.”