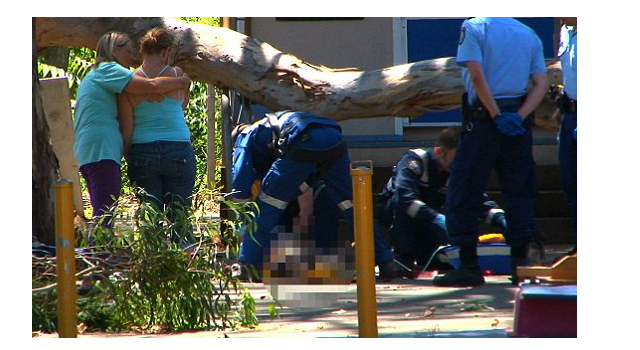 More than 5000 trees have been cut down in public school across NSW since an eight-year-old schoolgirl was killed by a falling branch in February.

The Hawkesbury community in northwest Sydney was left devastated when Pitt Town Public School student Bridget Wright was killed by a seven-metre branch that dropped onto her from a gum tree during lunchtime.

The NSW Department of Education said arborists had since removed 5042 trees after conducting assessments at 1960 public schools across the state, at a cost of more than $13 million.

‘These arborist assessments recommended tree safety works, including lopping and removal of trees at 1587 school sites,’ the department said in a statement.

Arborist Mark Hartley – who inspected the tree that killed Bridget and injured two other children and a teacher – said the move was a ‘knee-jerk reaction’.

‘If it was aimed at trying to prevent another fatality it is entirely ineffective.’

Mr Hartley said it was necessary to do maintenance on trees that were unsafe, but said cutting down thousands would not lower the mortality rate from trees at schools.

Another primary school student is treated by emergency service personnel after the tree fell on her at Pitt Town Public School. The NSW Department of Education said arborists had since removed 5042 trees after conducting assessments at 1960 public schools across the state

‘The department took the action it did because obviously we wanted to ensure, as far as possible, that there would not be another tragic situation involving death or even injury from tree branches or anything from trees,’ Mr Davis told Daily Mail Australia.

‘The main aim in all of this was to reduce the chances of something as tragic as what happened to Bridget Wright occurring to anybody else on public school grounds.’