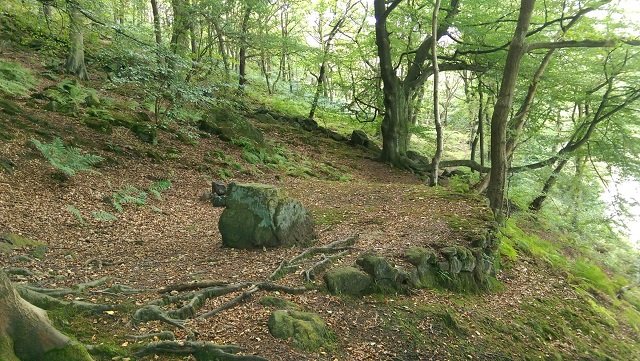 A £496,000 scheme has been launched to survey and celebrate the cultural heritage of Yorkshire’s woodland in the South Pennines, including woodland around Elsack reservoir.

The project is being led by Pennine Prospects, with support from Yorkshire Water, which is a major landowner in the South Pennines with 300 hectares of woodland.

‘ANCIENT Woodland’ is a treasured asset of the British Isles and is recognised by means of historic research, as any wooded area that has been continuously wooded since at least 1600 AD.

Ancient woodlands are distinct in that they often support and preserve a rich and diverse canopy of native trees, such as Oak, Hazel and Ash. They can also support rich ground-based flora, such as bluebells, wood anemone, ramsons and various fungi, not to mention provide natural habitats for wildlife.

Beyond the ecology of ancient woodlands, the general absence by means of development and clearance (such as on cultivated land) has also ensured ancient woodlands preserve within them the archaeology of woodland itself. ‘Humps and bumps’, as well as the trees themselves, can all shed light on how these ‘treescapes’ were managed and utilised throughout human history.

Woodlands were once a palimpsest of activity; from hunting, the provision of construction materials for buildings and ships, the production of charcoal, wood fuel, pig foraging, shelter for isolated farmsteads, links with textile industries, wood craft activities and the supporting of mining industries; woodlands were an essential and heavily managed resource.

As well evidence for the use of woodlands, they can also preserve evidence of human activity that pre-dates the woodland itself. For example, prehistoric or Roman settlement sites that once occupied open farmland may now be enclosed by later woodland. One such location is Honley Woods in Kirklees where a D-shaped Iron Age/Romano-British enclosure is preserved as an earthwork within later woodland.

Despite this, woodlands are increasingly under threat from development and unsympathetic management, due in part to a general lack of understanding and, in the case of the South Pennines, a lack of knowledge concerning the heritage of ancient woodlands.

It is this lack of knowledge that ultimately led to the establishment of the ‘Celebrating Our Woodland Heritage’ project by Pennine Prospects, a rural regeneration company that works to manage and enhance the South Pennines natural, cultural and heritage assets so they contribute to the social, economic and environmental wellbeing of the South Pennines. The £496,000 project is jointly funded by the Heritage Lottery Fund, Yorkshire Water, Newground Together Trust and The Green Bank Trust, with support from the University of Bradford.

It is estimated that four per cent of the land cover across the South Pennines is under woodland, a quarter of which is recognised as ancient woodland. A desk-based study of the ancient woodland and its known heritage was undertaken by Peninne Prospects in 2013, the result of which found vast gaps in our knowledge concerning the extent of archaeological features that survive, as well as gaps within our historic timeline, in particular the prehistoric through to medieval periods.

During the course of the next three years, and under the guidance of the newly-appointed Woodland Heritage Officer, Christopher Atkinson – an archaeologist with more than ten years’ experience in landscape investigations and community engagement – community groups, school groups, youth organisations, university students and the general public will be encouraged to explore and gain experience in surveying ancient woodlands across the South Pennines.

This will entail the discovery, recording and interpretation of features, such as old track ways, building platforms, quarries, charcoal production areas and old boundaries, all of which can inform the landowners and county Historic Environment Records of the history of the woodland. Individuals will receive training not just in archaeological field survey techniques, but through a series of workshops aid the investigation of areas of woodland by studying historic maps and documents, as well as utilise modern survey techniques, such as Light Detection and Ranging (LiDAR). LiDAR is an airbourne survey technique in which a pulsed laser beam is fired from a plane to measure the ground relief and the earthworks on it. It is particularly good at penetrating tree canopies, which makes it a fantastic resource when investigating woodlands.

As well as this, the importance of woodlands in human history will be told and promoted amongst early years and primary school children through a series of forest schools hosted by multiple forest school practioners organisations. Forest schools promote play and learning within natural environments and is very much child-driven.

The project is currently underway following a successful launch day on October 15 in Hebden Bridge, which involved a series of presentations and a guided archaeological walk of the National Trust woodland Hardcastle Crags.

If you would like to find out more about the project or take part, we would love to hear from you. You can visit our website at www.celebrate-our-woodland.co.uk/ or find us on Facebook at South Pennines Archaeology. Alternatively, you can drop me an e-mail at chris.Atkinson@pennineprospects.co.uk or call 07582 101691.