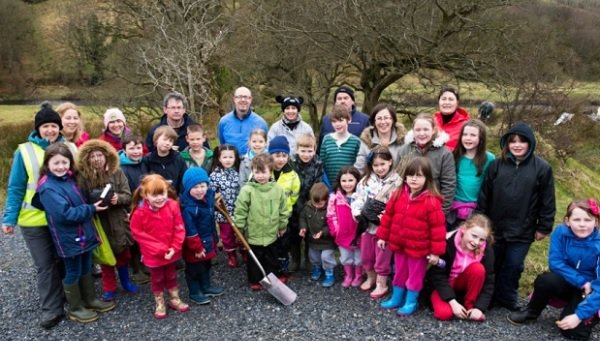 Hundreds of local people have helped to create a Centenary Wood in Faughan Valley, which will stand as a living testament to the local men and boys who lost their lives in World War I.

Local people and visitors lined the banks of the River Faughan last weekend to help the Woodland Trust plant thousands of native saplings.

The 21-hectare woodland, named ‘Brackfield Wood’, is one of four flagship woods taking shape throughout the UK as part of the Woodland Trust’s Centenary Woods project.

The ambitious initiative is to commemorate the 100th anniversary of the First World War.

In Derry, the charity has plans to plant 40,000 trees as a lasting and respectful tribute to the people of Ireland who lived and served during the war.

Patrick Cregg, director of the Woodland Trust, said: “It’s the perfect location. The wood – still in its infancy – stretches quietly by the banks of the river, in an incredibly scenic part of the country.

“This will be a special place where people can walk, relax and reflect.

“It will also provide a much-needed habitat for wildlife.

“Our plan is to link the nearby pockets of existing woodland and to create a continuous corridor for the valley’s precious inhabitants, which include red squirrels, otters and kingfishers.”

The charity is now offering members of the public the chance to dedicate a tree in memory of a loved one or community.

This is a unique and personal way to remember ancestors who lost lives during, or who were affected by, the war, and for further information on the tree dedication scheme, visit woodlandtrust.org.uk/fwwtree or call 0800 915 1914.

Sainsbury’s has supported the Woodland Trust since 2004 with the launch of free range Woodland eggs. Since then donations through product sales have expanded to chicken, turkey, apples and honey.

The partnership has helped the Woodland Trust to plant two million trees.

The Woodland Trust is the UK’s leading charity championing native woods and trees. It has more than 400,000 supporters.

The Trust has three key aims: i) to plant native trees and woods with the aim of creating resilient landscapes for people and wildlife; ii) to protect ancient woodland which is rare, unique and irreplaceable; iii) to restore damaged ancient woodland, allowing native flora and fauna to return.

Further news can be found at www.woodlandtrust. org.uk.