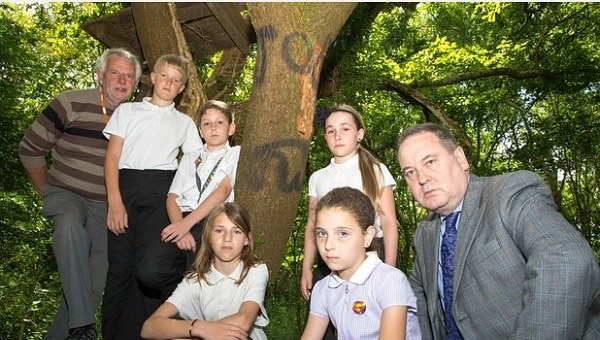 The mayor of Bodmin has condemned the vandals who damaged a tree and spray-painted others with graffiti – on some that could be more than 300 years old.

Andy Coppin, Bodmin town mayor, said he was “extremely disappointed” at the news that several individuals damaged a 300-year-old oak tree, while two more trees that were planted by schoolchildren 20 years ago were cut down at the Bodmin Beacon Local Nature Reserve.

“I’m extremely disappointed that certain members of the community are abusing this beautiful area. It’s just a few people, a minority and hopefully nothing to worry about long term,” said Mr Coppin.

He continued: “I think people from Cornwall council and the police are spending a lot of time investigating the matter, I have every confidence that the police and the council will carry out their duties.”

The damage was brought to attention by an angry resident who went to the site and took pictures of the damage, including a rope swing made from a removed branch, a beech and an oak tree cut down, the word ‘JOE’ tagged on a 300 year-old oak tree and fires lit using aerosol cans.

The resident, who did not wish to be named, said: “I have walked these fields for 30 years and there’s a hell of a lot of drug use going on in there. I have found loads of needles and I have tried to warn the local schools about taking going there.”

He continued: “The kids are out of control, my kids planted those trees there and one day they would want to take their kids back to see it, but they can’t now because of some stupid people who cut the trees down.”

“The damage is getting worse and I want to see what the main players say about the ignorant youth we have today.”

David Kinnair, from Bodmin Town Council, added: “The police are dealing with it now, until they have something to work with no further steps can be made.

“We’re just trying to find out exactly what’s been happening.”