250 year old tree in Batcombe goes down in 95mph winds 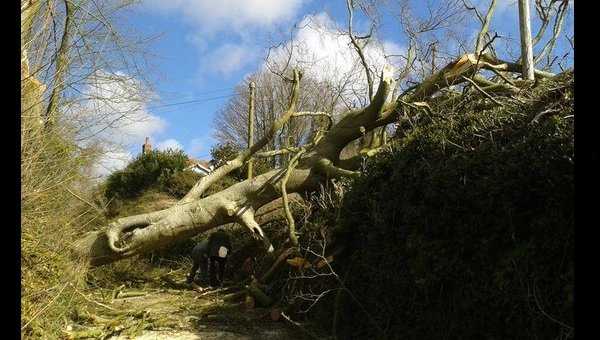 One of the oldest trees in Batcombe was toppled in the early hours of Tuesday morning as wind speeds of 95mph battered the county.

The Beech tree, which sat at the bottom of Batcombe resident Richard Mitchell’s garden, was believed to be up to 250 years old and had grown to a majestic size, dwarfing the telegraph poles on either side.

The tree caused widespread disruption to the village after it crushed the telephone and electricity lines and blocked two roads into the village.

Mr Mitchell worked hard to ensure disruption to his neighbours was kept to a minimum.

He said: “The Southern Electric guys were amazing. They worked out in the dark until midnight last night to restore power to the homes affected.

“We’d like to thank our neighbours for being so patient when the electricity was down.

“The whole village have been so supportive about our losing such a stunning tree … it’s one of the oldest in Batcombe and people have been incredibly upset.”

Mr Mitchell said the tree was “like a member of the family” but work is already underway to ensure another tree is grown in the Beech tree’s place.

He said: “There’s already a wee sapling in place that’s self-seeded. Here’s to the next generation.”