21 new woodlands in the National Park provide range of benefits 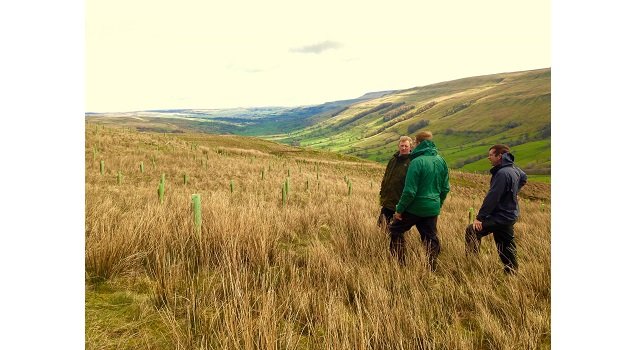 Across the National Park region, 82,000 trees were planted between October and March to create 21 new woodlands which will bring significant benefits for local wildlife, people, environment and landscape, thanks to a long running grant programme.

The Dales Woodland Restoration Programme is delivered and funded by a partnership including Yorkshire Dales Millennium Trust (YDMT), Yorkshire Dales National Park Authority (YDNPA) and the Forestry Commission. Together the partners aim to double broadleaf woodland cover in the Yorkshire Dales by 2020.

Through this initiative great strides have been made in Bishopdale in recent years, thanks to the enthusiasm and commitment of one landowner, Robert Brown.

Robert said: “Since 2010, I have dedicated 65 hectares of land in Bishopdale to the creation of new native broadleaf woodland, including two new areas of woodland planted this winter. In the last century we lost a large proportion of the woodland in this dale and, with the help of this scheme, I’m delighted that we’ve been able to restore some of the land back to native tree cover to support biodiversity and enhance the landscape for future generations.”

The YDNPA’s Senior Trees and Woodland Officer, Geoff Garrett, said: “The Dales Woodland Restoration Programme is a good partnership. The National Park Authority and the Forestry Commission are separate public bodies but with many shared interests. Along with the charity YDMT, we’ve pooled our expertise to offer grants and advice to landowners. In the 7 years of the partnership so far, we’ve spent £6m supporting new woodlands in the National Park. We are looking forward to working with landowners in the future, and spreading the news of the benefits that this fantastic programme has for them.”

Hedgerow planting projects have also been funded. The Maunder family in West Scrafton near Leyburn received a grant to buy native trees and shrubs including hawthorn, holly, blackthorn, crab apple, elder and hazel. The whole family got involved in the planting and, together with help from friends, created 200 metres of hedgerow which will act as an important corridor for wildlife.

Carol Douglas, Woodland Officer at YDMT, said: “As the Yorkshire Dales has less woodland than any other National Park in the UK, it has been fantastic to approve grants for 21 new woodlands this winter, which together will cover 58 hectares. We’re very keen to support more landowners wishing to plant trees, and are already accepting applications for the next planting season – please get in touch if you’d like to find out more.”

These woodlands and others have been made possible thanks to support from The Fuelcard Company and their Ecopoint customers who raised £338,565 for YDMT last year, enabling the charity to extend their woodland creation programme to areas outside the Yorkshire Dales National Park.

A small woodland in Mickley, near Ripon is one of the projects to benefit from this funding. Covering just under one hectare, Dr Judith Hooper and Dr Frances Cole, the landowners, hope that this new area of native trees will help to reduce the risk of flooding in the local area and benefit wildlife. By providing links between nearby Hackfall woods and existing hedgerows, it is hoped that the new woodland will help to support a thriving local population of birds, butterflies and insects.

Landowners interested in receiving free advice and funding to support the creation and management of new native broadleaf woodlands in and around the Yorkshire Dales should contact Carol Douglas at YDMT on 015242 51002 or email carol.douglas@ydmt.org.

The charity would hope to cover all costs involved in establishing a new woodland, including the supply and planting of trees and guards, fencing to exclude stock, gates to allow access and initial weeding costs. In some circumstances applicants may be asked to contribute cash, materials or labour.