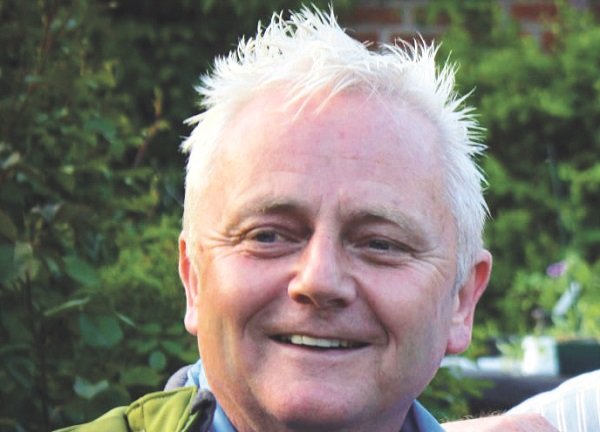 The main purpose of my trip in February this year was to promote the great trees of Europe and the European Tree of the Year 2015 contest (ETOTY15), organised by the Environmental Partnership Association (EPA).

The first goal was to visit all 14 trees entered into the awards, which were to take place on 20 April, and to meet the wonderful people associated with them. The second objective was to highlight to each country’s population how the trees can be celebrated.

The trees in the contest are not the oldest, largest or most well known but they are trees that each have a story that has touched the heart of their respective countries.

So I developed a vague plan in my head but I still had to make it happen.

As I hope you will see in my forthcoming book and film, the plan was usually announced a day or two before each visit, with hastily made accommodation and travel arrangements. Some, so much so that I was not allowed on trains without a reservation! Thankfully, I managed to overcome that one on each occasion.

The trip started in Estonia – the furthest country I would visit. As it would be difficult to get to that country by train, I flew. The Football Tree or oak on a football field is unique as far as I know since it is situated near the centre of a league football pitch! Yes that’s right, actually on the pitch. They play football around and off this tree! As with many of the trees I visited, there was much media interest, with Estonian national TV even bringing a drone to film from above. The tree is on the island of Orissaare, just off the Estonian mainland. Voting in Estonia was easier than in most of the countries as they have an amazing IT infrastructure and access to 4G everywhere. That helped a lot.

So it was that the organiser, Heiki, was able to mobilise folks to vote. In the last week alone he gained 20,000 votes by walking and running over 100 miles pulling a replica football pitch and tree complete with figures playing football whilst live streaming his run to YouTube on 4G. All of the trees and their individual stories can be seen on the website: www.treeoftheyear.org.

After Estonia, I travelled home and then to Scotland to visit Lady’s Tree, a Scots pine with a nesting osprey that has fledged more than 55 chicks in 24 years. Being canoed through a frozen lake for a rare visit to the tree was a highlight of this trip. Thanks to Rab, Charlotte and Jonathan of Scottish Wildlife Trust and Rory Syme Woodland Trust.

On to England and the Major Oak, Robin Hood’s tree in Sherwood Forest. Graeme and Charlotte (Nottingham Council) took me hobbling to the tree, having broken my toe on a short trip in Estonia – literally. It was the first year England had a tree in the contest. I knew it would do well. Thanks to the Woodland Trust.

And so to Wales. The Lonely Tree of Llanfyllin is another Scots Pine, lying prostrate after falling in the storms of 2014. We are hoping it will rise again like a phoenix. Many trees do achieve this, so fingers crossed. Owner, Peter Lewis, took me to the top of the mountain to meet this wonderful tree again.

Next it was back to mainland Europe and Oak Slav at Dębina, near Wroclaw in Poland. The 7.5m girth oak was accompanied by around 60 people. They even brought a cannon, which they fired!

In the biting cold it was on to the Czech Republic and the Black Pine at Opatovice. The school and teachers turned out and sang and performed many pieces for us. We sheltered in the brilliant map museum where I was presented with an amazing gift: reproduction maps of the Czech forest dating back to the 1500s.

Slovakia had the only fruit tree in the contest – a beautiful mulberry. This tree and the region’s silk-industry history were explained to guests at a large press conference where I was again presented with many lovely gifts including handmade Tree Hunter biscuits. I was very humbled by this reception but sadly I had all too little time in Slovakia. I must return soon.

Hungary has its Great Plane tree sitting at the edge of Lake Tata in the north-west of the country. Again, there was much media interest. Coincidentally, I revisited Hungary in May with the European Champion Tree Forum. Zsusanna, Eva and Levente were very kind and the mayor of Tata presented me with a lovely framed photo of the tree.

The overnight train to Bulgaria was fun, taking me to the very cold border town and river port of Vidin on the Danube. Next day, I travelled with Pavel to Archar where we saw their plane tree and met a very special teacher called Miro. The tree was planted in 1963 by an ex-teacher at the local school, whom I met. We had a quick visit to the school and then on to the next tree.

In Italy they have an ancient olive tree that is over 6m in girth and more than 2,000 years old. It sits in the mountains of Canneto Sabino and is in an area of many olive groves and beautiful landscapes. How can I put it? Much fun was had tracking this ancient tree down.

With a European Interrail Global pass kindly provided by Voyages SNCF, I was now off via Milan and Marseille to Barcelona, Zaragoza and then into remote Aragon and Calamocha. Rail travel is certainly a great way to see Europe.

I must admit some bias here as Aragon now feels like my second home. I have travelled a few times to what must be the best tree festival in Europe. The Chopos Cabecero fiesta in October is a celebration of tree culture here and their amazing black poplar pollards. Thousands of culturally significant pollarded trees line many of the region’s small rivers such as Rio Pancrudo, which has more than 23,000 along its 20 mile course.

After a press conference in Teruel, the capital of the region, we moved on for more filming at the tree in Aguilar del Alfambra. Due to technical problems we ended up filming live in a small mountain bar in the middle of a cooking
programme! Chatting about trees during the programme was so funny: “Here is the cake mixture and this is how to ice it. Now over to Rob – what is this tree?”

Having left my many Spanish friends – Chabier, Carmen, Eva, Pilar, Jose Miguel and many others, it was back to the UK.

After a little gap it was off to the awards ceremony in Brussels, allowing me to take a quick visit to The Nail Tree in Voeren. This horse chestnut was considered to have restorative powers in the middle ages. Locals would rub a nail onto the afflicted part of their bodies before driving it into the tree in the hopes it would absorb their pain. There are now over 15,000 nails in it! Thanks to Roel and Marc for their Belgian tree hospitality.

At the time of writing I had seen 12 of the 14 contenders and was due to visit Ireland’s entry early in June followed by a trip to Corsica to see the ancient French sweet chestnut tree.

At the awards ceremony at the Cercle Gaulois in Brussels, the results were announced. Spain had (in its first year) come third, with over 10,000 votes and they were absolutely delighted. In second place it was the plane tree of Tata, Hungary with 53,000 votes and topping the poll was the Estonian Football tree with nearly 60,000 votes.

This trip, part funded by Fund4Trees, The Royal Forestry Society, Voyages SNCF and Craghoppers clothing, has certainly opened my eyes as to what is possible and how amazing trees there are right across Europe.

It has made me even more determined in my mission to find, recognise, promote and hopefully gain protection for the many special cultural, heritage and ancient trees across the UK and mainland Europe.

We must ensure that these great old cultural trees are protected for our children, our grandchildren and generations to come before it is too late. These individual trees are as significant to us as the world’s great rainforests. We must look after both or we will suffer the consequences. The world must now focus not on economic growth as an obsession but on living in harmony, happiness and contentedness with the planet.

Rob McBride, the Tree Hunter, promotes ancient trees through lectures, courses, and tree walks. He has appeared on many TV and radio programmes and lobbied at the highest level. He undertakes research using archive material and maps to gain a detailed insight into your unique treescape. www.treehunter.co.uk