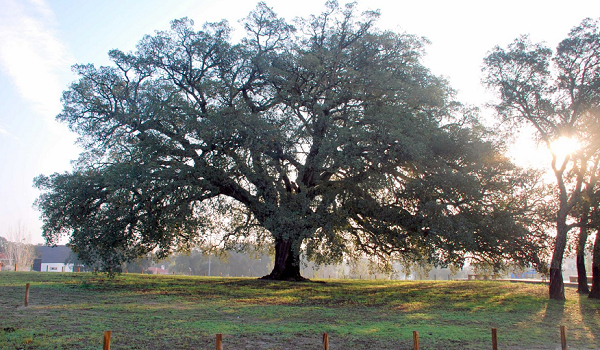 The winner of the European Tree of the Year contest 2018 was unveiled tonight in Brussels in front of 200 participants. The Whistler Cork Oak from Alentejo, Portugal has won with the support of 26,606 votes, followed by the Spanish Ancient Elms of Cabeza del Buey (22,323 votes) and the Russian Oak ‘Elder of the Belgorod Forests’ (21,884 votes).

The Whistler Cork Oak is named after the sound of the countless birds that perch on its branches. Planted in 1783, the cork oak has been stripped more than 20 times. It is classified as “Tree of Public Interest” and registered in the Guinness Book of Records as “the largest cork oak in the world”. On behalf of the Whistler Cork Oak, Nuno Calado, Secretary General from UNAC – Union of the Mediterranean Forest received the unique wooden trophy that passes from winner to winner every year: “we are extremely happy to bring the ‘European Tree of the Year’ recognition to Portugal. Not only it is the first year that Portugal has taken part in the contest, but it has also been a difficult year for us. This cork oak represents a huge contribution to ecosystem services, fighting climate change, in addition to its contribution to the Portuguese economy” he said.

Communities have rallied around all 13 candidate trees competing for the ‘European Tree of the Year’ title, energetically promoting their favourite candidates during the month of February. 200,000 votes were cast during the voting period. Following the top 3, the results of the voting are:

The Award Ceremony has been hosted by MEP Pavel POC, vice-chair of the Committee on Environment, Public Health and Food Safety at the European Parliament and long-term supporter of the Tree of the Year initiative.  The ceremony has been moderated by Natalie Pauwels and Ladislav Miko from the European Commission, and counted with the special presence of Daniel Calleja Crespo, Director General for Environment.