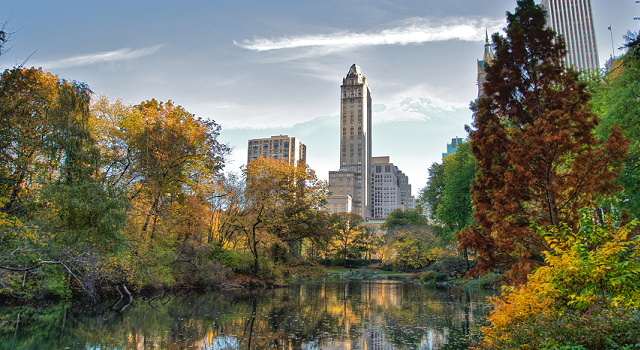 According to a study published in Ecological Modelling, planting 20 percent more trees in megacities would mean cleaner air and water, lower carbon and less energy use, doubling the benefits of trees in cities. Benefits include pollution reduction, carbon sequestration, and energy reduction.

The authors of the study, which was carried out at Parthenope University of Naples in Italy, say city planners, residents and other stakeholders should start looking within cities for natural resources and conserve the nature in our urban areas by planting more trees. Their work has been selected by an international scientific committee to be given the Atlas award.

Megacities, which are defined as cities with at least 10 million people, house 10 percent of the world’s population.

For the study, researchers looked as famous urban forests in megacities, such as Central Park in New York City, St. James’ Park in London and Bosque de Chapultepec in Mexico City. On average, about 20 percent of the area of each of the world’s megacities is urban forest today. But the new study reveals that a further 20 percent could be transformed into forest – something that would change residents’ lives for the better.

Theodore Endreny, Ph.D., PH, PE, lead author of the paper and now professor of the Department of Environmental Resources Engineering at the State University of New York ESF campus explained: “By cultivating the trees within the city, residents and visitors get direct benefits.

“They’re getting an immediate cleansing of the air that’s around them. They’re getting that direct cooling from the tree, and even food and other products. There’s potential to increase the coverage of urban forests in our megacities, and that would make them more sustainable, better places to live.”

Creating a model for each megacity they estimated benefits such as reductions in air pollution, stormwater, building energy and carbon emissions, and assessed how those benefits changed as the tree cover was increased. The model took into account the local megacity tree cover, human population, air pollution, climate, energy use, and purchasing power. The team was surprised to find that each city has the potential to host a further 20 percent coverage of forest canopy.

However, city planners and authorities will need to change their perception of the natural resources available to cities before residents can enjoy the benefits of more trees: the less cities rely on nature outside the metropolitan area and the more they focus lands on conserving nature within the cities, the healthier and more sustainable those cities will be.

“Everyone can take action to increase the urban forest areas in our cities, not just city planners,” added Dr. Endreny. “You can visit the free resource itreetools.org to find out how much coverage there is in your city now, find out where you could plant more trees in your area and see how the benefits of the urban forest increase as more trees are planted.”