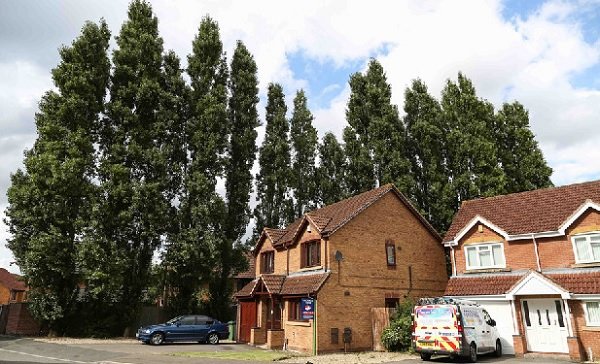 Several trees are potentially endangering people’s lives in Gloucester according to a resident who wants them felled. A total of 16 trees line Darren Thomson’s garden in the The Larches, Abbeymead.

Mr Thomson fears the roots are causing significant damage to nearby buildings.

He told Gloucester City Council in his application to chop the trees down how they could have a serious impact on nearby residents.

In the application he says: “There are a number of Kombardy Poplar trees along the left hand side boundary of my property, where the trees and the roots are causing damage to properties.

“They are a potential threat to people’s safety. The request is to have all the trees felled and removed permanently.”

They have a Tree Preservation Order on them, meaning they are legally protected from being felled or drastically changed.

The orders are there to protect trees considered to be of special value in terms of amenity, history or rarity.

It is a criminal offence to cut down, lop, top, uproot or damage a protected tree without the consent of the local authority. People who commit these offences could be fined up to £100,000.

Keith Dighton, owner of KAD Total Tree Care in Gloucester, said there should be little problem in achieving the permission if there’s a real risk to nearby buildings.

“Most of Gloucester and Cheltenham is in a conservation area so you have to get planning permission anyway,” he said.

“Anything above 75mm will need permission before it is felled.

“An officer will come and have a look at it to see if they can give it the go ahead. It is a very common reason for removing them as the owner could be liable if any damage is caused by the trees.”

The tree surgeon said it would be a specialist job because of the difficulty in removing poplar trees.

“They are horrible to remove. They can grow to enormous sizes, I felled one that was 44m high the other day,” he said.

“It is quite a soft tree and they are prone to break and rot away. They are often used on flood plains because they can soak up around 100 litres of water.”