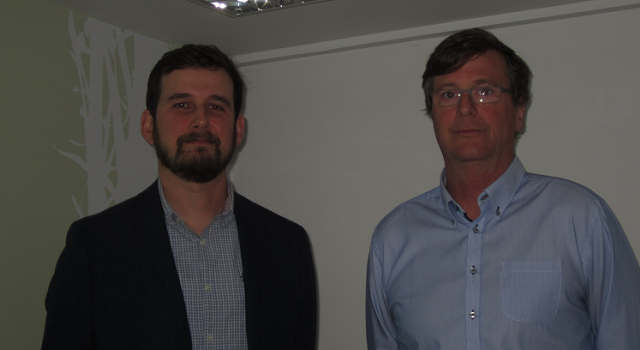 A seminar with Philip van Wassenaer and Alexander Satel, 30 April 2018

Philip founded his company Urban Forest Innovations Inc in 1994, having started his professional life as an arborist, while Alex began in traditional forestry. Philip and Alex share almost three decades of experience in developing urban forest and pest management strategies for municipalities in Canada and beyond, and brought with them valuable insights.

They told us that while Canada is very much a ‘forest nation’, more than 80 per cent of its population lives in an urban environment, with rural populations continuing to decline. We began by examining our understanding of the urban forest. Trees are, of course, its main element, but Philip reminded us that shrubs should not be forgotten. As underground utilities increase, there becomes less space for trees. Typically an urban forest is under municipal jurisdiction or influence, and is regenerated by the human action of planting. Diversity within the forest may be high, but there are several invasive and non-native species in the urban forest.

Part of an urban forest can be used recreationally, but in addition to park, street and residential  trees, it also includes trees in natural areas and those growing in commercial and institutional areas of towns and cities. Trees are managed for people, but urban forestry is as much about managing people as it is about managing trees.

Trees bring many benefits, and these benefits can now be quantified and given a monetary value. Bigger trees bring more benefits than smaller ones because they have a larger leaf area. Philip and Alex prefer to talk of ‘leaf area density’ rather than the ‘urban tree canopy’ because from an aerial viewpoint we cannot see the size of a tree. Leaf area density ‘translates’ as the green leaf area relative to the total land area.

There are several challenges to the sustainability of the urban forest; these include development, invasive species, pathogens, diverse ownership, increasing costs, tree mortality and complaints. Drought and saturation are both stressors of trees, as are radiated heat, limited or poor soils, damage and vandalism, pollution, competition, choice of poor sites, and pests and diseases. Philip and Alex believe climate change will only exacerbate these stresses.

Diverse ownership brings different values to the picture, and in Canada only between 15 and 35 per cent of the urban forest is in municipal ownership. We were told that while 11 per cent of the city of Toronto’s budget is spent on policing, just 0.6 per cent is spent on forestry. And while few would argue the two should receive the same sums, Philip and Alex told us that in Canada there is very little higher level government support or research for the urban forest.

The first step in good management of the forest is in using our data to make informed decisions. The four goals should be to note current conditions, decide priorities and actions, monitor what we do and engage others in the process.

When examining current conditions, it is important to know what is already there, either by making a tree inventory or by geospatial analysis. Inventories may be full, partial or plot-based. Full and partial inventories are site-specific and when conducting an inventory, Philip believes it is important to include information on trunk integrity, crown structure and canopy vitality.

Any work which needs to be done to a tree can be classed in one of five  categories:

3Moderate (within a year)

A plot-based inventory can help to determine the structure and function of the urban forest, give ecosystem services a value, set goals, attain funding and ‘sell’ the urban forest. For Philip and Alex, i-Tree Eco is the ‘gold standard’. It uses 200 plots of 0.1 acre as a general guide.

Once the current tree situation has been established, this information can be used to determine priorities for action; these may include tree maintenance and risk mitigation, tree planting plans, canopy cover targets, the potential plantable area (PPA), the priority planting index (PPI), which tells where trees would be best planted, and pest and other issues management.

Philip told us that monitoring is critical for the active adaptive management of trees, and that the key metrics are the structure and function of the forest, performance, engagement and values. He feels crowd-sourced data can help with tree management and that ‘citizen science’ is real science. He has found that professionals and volunteers agree between 91 and 95 per cent of the time on genus identification, but only between 46 and 96 per cent of the time when it comes to species identification.

The objective of management planning for the urban forest should be to develop a long-term strategic plan; The urban forest management plan (UFMP) becomes a guiding document which describes a community’s vision and goals, and outlines strategies to realise and achieve them. A UFMP can identify challenges, set targets, lead to proactive management, promote integration and communication, provide a technical resource, encourage engagement and secure resources.

An urban forest management plan should ask and answer these five questions. What do you currently have? What do you want? How do you achieve this? Who does what and when? How will you know where you are with the plan?

What do you currently have? The context can be set by an inventory or by looking at canopy cover. Stakeholder input can be from three groups – those working within the council (internal), those such as utility companies, conservation authorities and non-profit organisations (external) and the general public. The liaison is in two phases – listening and giving feedback.

What do you want? Be forward-looking, concise and aspirational, but realistic. How do you achieve this? First establish a ‘time horizon’, suggested Alex and Philip. Five years is probably too short, and 20 is much more feasible. A 20-year plan can then divided into four five-year management periods. The guiding principles should reflect community values and its vision, inform the development of the plan and steer its implementation

Who does what and when? Now it becomes important to prioritise actions by needs, establish timelines, assign responsibilities, allocate resources and provide guidance. How will you know where you are with the plan? Active adaptive management is needed here. Collect and analyse data, then decide what to do and then act accordingly. It pays to have a periodic ‘check-in’ with stakeholders, and then re-assess values and priorities. A UFMP must be a ‘living’ document that is responsive to changes through time.

In the final session of our day, Alex and Philip addressed pest management, with particular emphasis on the emerald ash borer, which is a major concern in Ontario. Philip said we have not always learned enough from various ‘invaders’ in the past, but here was a real opportunity to do so.

In Canada pests are regulated by the Canada Food Inspection Agency, but managed by municipalities. Pesticides are regulated by Health Canada, and in Ontario ‘cosmetic’ pesticide use is banned. A pest management strategy would do well to include the following components – making a tree inventory and threat assessment, detection and monitoring, tree management, restoration, adaptive management and research, regulation and communication.

The presentations were well received by delegates, with much useful interaction between them and the two excellent presenters.