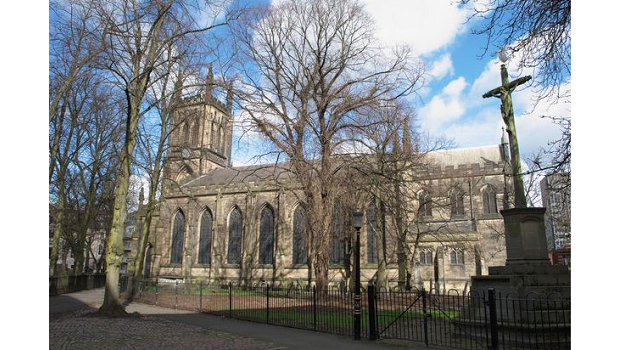 Leicester council say that they are willing to discuss potential late changes to their scheme to revamp a Leicester churchyard after sustained protests about the potential felling of 21 mature trees.

The council aim to revamp the area surrounding St George’s Church in the Cultural Quarter, stating that it is gloomy, unsafe and used by drug addicts.

The £900,000 scheme has been heavily criticised by Leicester Friends of the Earth and the civic society who state that the trees add character to the area, and should therefore be saved.

The aim of the scheme is to revamp the churchyard by felling the trees, stating that it will open out the area and prevent water run-off from leaves and branches damaging the Grade II-star listed Serbian Orthodox Church.

Councillor Kitterick said the most problematic part of going through the churchyard was the turn of the footpath as it bends round the church. The bend prevents people seeing what or who is around the corner.

The councillor joked: “The campaigners have come up with some very good ideas to sort that problem without demolishing the church.

“I don’t think we will need to remove the trees either.”

One of the ideas the campaigners have come up is running a straight path with clear lines of sight through the churchyard.

Councillor Clarke replied: “Of course, any way we can achieve the principles of the project without removing so many trees – any suggestions are very welcome.”

He said that in 2016 the council consulted people about the scheme, and as a result a plan to fell 26 trees was reduced to the current proposal of 21.

Coun Clarke added: “I recognise new ideas can come forward at a very late stage and I welcome the ideas.”

He said he was happy to work with Friends of the Earth to get the right scheme in place.

He added: “As the heritage champion, I feel the obligation to promote the protection of a nationally significant building, part of built heritage, that was seen at the outset of the Cultural Quarter to be the heart of that area.

“I accept there are competing demands in that area.

“Yes, the trees are important.

“Yes, the sanctity of the church is important.

“Yes, the fact that people feel unsafe in that church yard is important.

“What we as a city should want to do is ensure that the biggest piece of green space in the city centre is culturally vibrant and economically vibrant where people feel safe and they do not find needles in that churchyard.”