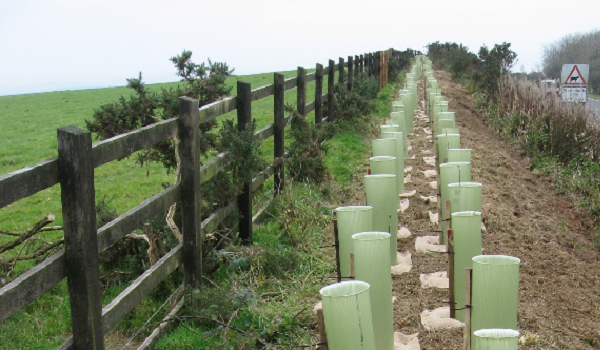 Highways England is starting a major programme of tree and shrub planting along the A30 and A38 in a bid to connect a 105 mile corridor of wildlife habitat.

The work is taking place at 21 sites in Devon and Cornwall and involves the planting of 10,000 native trees and shrubs to fill or reduce gaps in hedgerow and woodland along the roadside.

In total the planting will provide around three extra miles of vegetation and connect over 105 miles of habitat on the verge and land adjacent to the A30 and A38.

The scheme is being delivered under Highways England’s national Biodiversity Plan which is being supported by a £30 million national investment programme over the next five years.

The plan recognises road verges and associated land can be managed to provide areas of habitat, relatively free from human access, that may be scarce in the surrounding landscape.

These road verges can also be used to connect fragmented habitats in the wider landscape, enabling plant and animal populations to move and interact, and so become stronger and more resilient.

Highways England is committed to protecting the environment through its biodiversity plan and improving the connectivity of habitats along our roads is one of our top nature conservation priorities.

The main aim of this improvement scheme is to reconnect wildlife habitat and ecosystems on a significant scale across our road network in the South West allowing species to move between core areas.

The work is expected to have a huge benefit for a wide variety of species of animals including insects, birds, and mammals, such as butterflies, bees, flies and dormice, suitable places to forage, shelter and breed.

Tree and shrub species being planted include oak, maple, holly, willow, honeysuckle and rose at locations between Pocombe Bridge and Pulsack on the A30 and Wrangaton and Bellamarsh on the A38.

The programme runs from Monday 5 February until Friday 16 March 2018.

The majority of planting will not require any traffic management but a few schemes may require lane closures at times and no delays are anticipated.

Highways England has also been undertaking a lowland heathland conservation scheme in Devon and Cornwall and has plans to expand its species rich wildflower meadows in the South West as part of a future improvement programme.

The lowland heathland is a priority for nature conservation because it is a rare and threatened habitat which supports a variety of scare birds, animals and plants.

There are several areas on the Highways England network in Devon and Cornwall where road verges are either suitable for heathland species or are located adjacent to sites where heathland is present or has been historically recorded.

Work has included the planting and management of new heathland areas and aftercare at eight locations covering over 26,000 square metres across the Highways England network. Location sites are along the A30 and A38 including Dartmoor, Bodmin Moor and Goss Moor, and Haldon Hill.