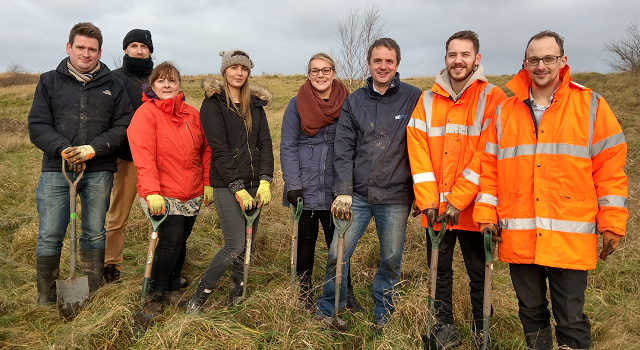 Harworth Group plc is supporting the environmental charity City of Trees with nearly 40,000 saplings being planted across Wigan and Bolton.

Harworth group plc are one of the UK’s leading land and property regeneration companies and for the past two years they have been working with the City of Trees movement supporting the planting of nearly 40,000 new trees.

The Rotherham–based company recently donated over 25 hours of staff time with a number of team members coming along to a volunteering day at Bickershaw in Wigan on Thursday 7 December.

The former colliery has a fascinating history of toil and hard labour. Neglected for decades, the site will be transformed into a country park for the benefit of both people and the environment, with around 1,000 new trees being planted in December.

As well as volunteering their time, Harworth have made a £1,000 donation to support the charities work in planting 3 million trees across Greater Manchester within a generation.

Owen Michaelson, Chief Executive of Harworth Group plc, said: “The City of Trees movement is making a huge difference to the landscape of Greater Manchester and is improving the quality of life for its residents. We’ve had an excellent working relationship with the charity over the past two years and our ongoing commitment will further help City of Trees to meet its target.”

He adds: “Their support will help us to grow more trees for Greater Manchester and transform the landscape for the benefit of both people and the environment”.

Harworth owns or manages 139 sites across the North of England and the Midlands totalling 21,000 acres. A key site is Logistics North in Bolton where they previously worked with the City of Trees movement to plant over 38,000 trees as part of the creation of Cutacre Country Park.