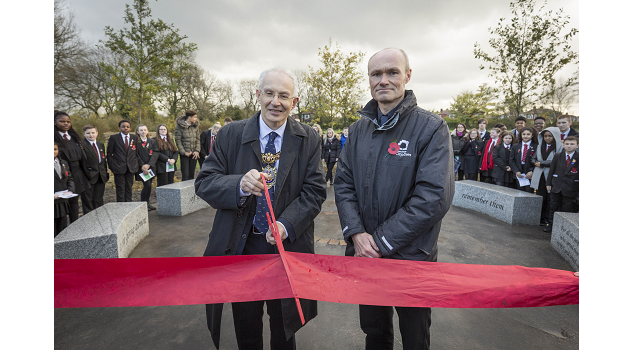 The first trees have been planted to help create a memorial woodland for Greater Manchester ahead of Remembrance Sunday.

Leading environmental charity City of Trees officially unveiled the 19 oak trees alongside memorial seating on Friday 10 November at Debdale Park Gorton, paying tribute to those who served their country in the Great War 1914-1918 and armed conflicts since.

The event took place ahead of both Armistice and Remembrance Day, and formed part of the WW1 Centenary Events, which are taking place between 2014 – 2018, to mark the 100th anniversary of the First World War.

Lord Mayor of Manchester Councillor Eddy Newman was there to oversee the proceedings with attendees from the Royal British Legion, veterans, local residents as well as pupils from local school Wright Robinson College.

Heroes Wood is located in the grounds of the historic Debdale Park, which at 45 acres is one of the largest inner city parks in Manchester. The woodland and memorial seating area have been designed to provide a place of reflection and contemplation for all people that have been affected by war.

At the event the granite memorial seating was unveiled with a newly created pathway leading up to it, framed by an avenue of large English oak trees.

A bugler heralded the start of a minutes’ silence, with veteran Michael Phillip Hosker, 50 – who served in the Royal Army Ordnance Corp, Royal Logistics Corp (TA), 5 Ordnance Battalion – laying a poppy wreath alongside a pupil from Wright Robinson College.

Those in attendance also helped to re-sow the poppy wildflower ‘trench’ which will frame the edge of the woodland, demarcating the site from the rest of the park.

Pete Stringer, City of Trees comments; “We’re proud to have created Greater Manchester’s first ever memorial woodland, and what we hope is a fitting tribute to all those how have lost their lives or been affected by armed conflict”.

He adds; “This project wouldn’t have been possible without the amazing support of individuals, local groups and companies who have dug deep to make Heroes Wood happen”.

Galliford Try, a leading UK construction group was one of several companies that came together to help make the project a reality, stepping in to deliver the footpath and memorial space.

Gino Salvatore, Galliford Try Business Development Manager, said: “Having pledged our support to City of Trees earlier this year, we are delighted to join forces with them, once again – this time to help create this memorial woodland to remember and honour heroes from the Great War.

As a business, we are committed to leaving a lasting legacy in the communities in which we work, and are pleased to play our part, alongside our supply chain partners. Special thanks to Chandos Civil Engineering, CEMEX, Aggregate Industries, R&M Developments and Beers Ltd.”

In November last year City of Trees asked for the public’s support with a successful crowdfunding campaign enabling work to begin on the flagship project.

Now tree planting season has arrived, the 19 high impact oak trees have been planted creating an avenue along the pathway, leading to the inscribed memorial seating

The rest of the trees, including large hornbeam, Scots pine, beech and lime will be planted in early 2018 – with 100 trees being planted in total – completing the commemorative woodland.

Local pupils from Wright Robinson College will also be working to help create on-site signage as well as information for an online and printed resource that will tell the story of how local people served their country during the First World War.