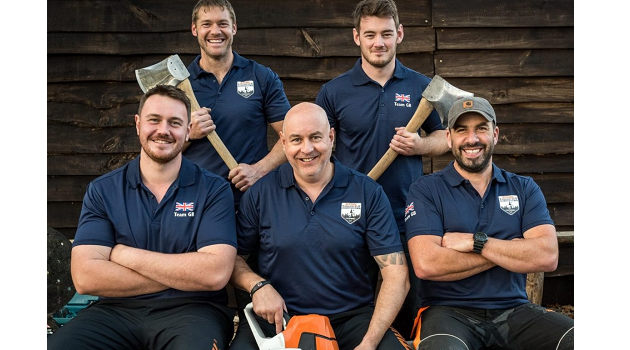 The British STIHL TIMBERSPORTS® team had their sharpened axes and saws at the ready as they jet off to Norway to battle the best lumberjacks on the planet at the 13th annual STIHL TIMBERSPORTS® World Championships in Lillehammer on 3 and 4 November.

The two day competition, featuring both team and individual events, saw more than 100 athletes from 23 countries slice and dice their way through tree trunks across six axe, saw and chainsaw disciplines to be crowned the best lumberjack in the world. The British STIHL TIMBERSPORTS® team will be joining logger sports athletes from all over the globe, including Australia, New Zealand, America, Canada and Europe.

Team GB comprises of Elgan Pugh, Glen Penlington, Simon Bond, Chris Pratt and Andrew Evans, all of whom went toe-to-toe at this years STIHL TIMBERSPORTS® British Championships, and are the best athletes in Britain. Elgan was crowned the British Champion for a third time, with Simon and Glen taking 2nd and 3rd spot respectively. The current British Rookie Champion, Jack Easen, also joined the team in Norway to provide assistance, as well as gaining valuable experience as he begins his logger sports career.

Spike Milton, former STIHL TIMBERSPORTS® British Champion and official TIMBERSPORTS® trainer, said: “The guys are really looking forward to the STIHL TIMBERSPORTS® World Championships and being able to represent Great Britain on the biggest stage. Competing against the world’s best puts extreme pressure on each team member to perform to the highest standard, but Team GB has been training exceptionally hard in preparation for this event and we’re excited to see what we can achieve over the two days.”

In the team event on Friday 3 November, each national team will compete in a knockout system, where four athletes will complete the Stock Saw, Underhand Chop, Single Buck and Standing Block Chop events in a relay race. The challenge was won by the Australian National Team at last year’s world championships.

The world’s best 12 STIHL TIMBERSPORTS® athletes took centre stage on Saturday 4 November in the individual event, competing against one another in all six disciplines, including the Springboard and Hot Saw. Each competitor had their physical strength and technical accuracy pushed to the limits, with points awarded according to their respective times and the athlete achieving the highest number of points will be declared the STIHL TIMBERSPORTS® Individual World Champion. Jason Wynyard of New Zealand was named the champion of the individual competition last year.