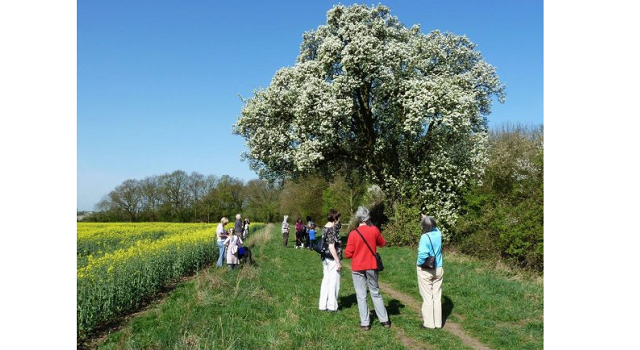 A prize-winning pear tree which is set to be uprooted to make way for HS2 will live on after a sapling was grown by horticulturists.

Numerous failed attempts have been made to save Cubbington’s historic wild pear tree, including a petition to the Parliamentary Select Committee on HS2 which called for a tunnel which cut under the wood instead of through it.

But Cubbington Action Group against HS2 has decided to take different approach and join forces with a lecturer and students from Shuttleworth Agricultural College in Bedfordshire to graft cuttings from the tree.

The tree is around 250 years-old and is the oldest and largest in the country. It was also voted Tree of the Year in 2015.

And now lecturer Paul Labous has successfully taken a graft from the base of the tree.

He previously succeeded with another ancient tree, the Warden Pear, which is mentioned in Shakespeare’s ‘The Winter’s Tale’.

Campaigners are now looking forward to the tree returning ‘home’ and hope it will thrive in Cubbington.

Peter Delow, chairman of Cubbington Parish Council and the action group, said: “Although there can be no adequate compensation for the present residents of Cubbington for the loss of a much-loved tree, I am very grateful to Paul and his students for their work in securing for us a source of saplings that should ensure that, in due course, future generations will once again have their springs brightened by the sight of a mature pear tree in blossom.”

The high speed railway line will see a total of 54 kilometres of the 190km route travel through the heart of Warwickshire, with the first trains set to run in 2026.

HS2 Ltd is carrying out early works throughout 2017 ahead of the main contractors starting on site from next year. The early works include site investigations, enabling works, demolition and land preparation, and new wildlife habitat creations.