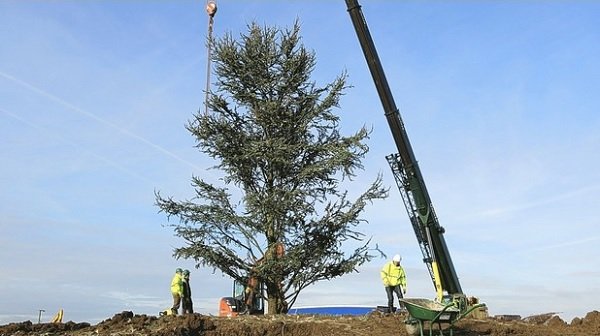 A huge 45-year-old tree has been planted at the entrance of a 3,600 home development in Chelmsford.

Standing at 11 metres high, the Blue Atlas cedar is the largest tree that will be planted at the Beaulieu Park expansion, off White Hart Lane.

Andrew Carrington, managing director, strategic land at Countryside, said: “As we did at Beaulieu Park, we always strive wherever possible to plant a combination of mature and semi-mature trees on our schemes from the outset.

“The planting of this magnificent cedar at the entrance to Beaulieu reflects the heritage of the site and the existing parkland setting of New Hall.”

The evergreen tree has a girth of 90cm and its canopy has a spread of six metres.

They can live for hundreds of years.

The tree has been planted at the main entrance to Beaulieu on White Hart Lane and alongside it will be a major piece of public art depicting a group of deer by sculptor Jane Ackroyd, to tie in with the heritage of the site.

Beaulieu was formerly part of the historic estate parkland once owned by King Henry VIII, which surrounded his Tudor palace known as Beaulieu, now home to New Hall School.

The first phase of new homes go on sale in early summer.

While the tree is impressive in stature, North Fambridge man Dave Fountain’s achievement in 2001 puts it in the shade.

Together with singer turned gardener Kim Wilde, the former Countryside man secured the Guinness World Record for successfully moving the world’s largest tree – a 17.8 metre high London plane tree, the same as the one that stands outside High Chelmer shopping centre in Chelmsford – from Belgium before replanting it in Manchester.

The tree stood for six years until it was toppled by a storm in 2007.