100,000 saplings being planted in the peak district 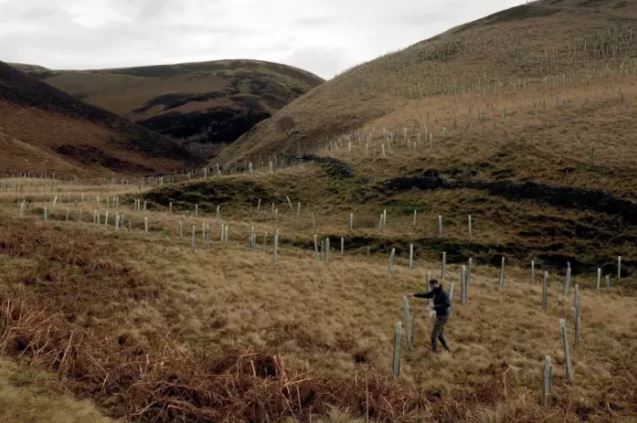 More than 70 people have been working with the National Trust to plant 100,000 saplings in one of the UK’s largest woodland creation projects.

Look at the place names on a Peak District map, and you’ll see something missing, says Tom Harman, National Trust project officer for the High Peak.

“Coldside Oaks, Hope Woodlands, Peak Forest, for example. There’s little woodland now at Peak Forest, but there would have been once.

The Peak District naturally should have more woodland. It’s a huge area of land with very few trees in it, and we want to change that.”

Over the last three years over seventy people, including contractors and volunteers have been working with the National Trust planting 100,000 saplings along the steep valleys (‘cloughs’) of the Dark Peak in one of the UK’s largest native broadleaf woodland creation projects.

Oak, birch, holly, hawthorn, rowan, aspen and alder trees are taking root on the slopes above the Howden and Derwent reservoirs and around Kinder Scout, and these new ‘clough woodlands’ will soon grow into a landscape very different to the conifer plantations around the dams, or the bare grass below the moors grazed by generations of Derbyshire sheep.

“If you’ve got sheep grazing in the uplands you’re not going to get trees growing without doing something about it,” says Tom. “So we’ve fenced areas off to allow trees to grow naturally, and we’ve planted trees in guards where we still get some sheep.”

Visitors can help by closing gates in planted areas after passing through, as stray sheep can quickly knock over guarded trees and eat the saplings.

Fencing allows natural regeneration with access for walkers via gates and stiles, says Tom, indicating a fenced woodland above Howden originally established in the 1980s, where local oak and birch trees have grown up alongside planted varieties.

“This wood wouldn’t be here unless someone had put a fence round it 30 years ago,” Tom says.

Partner organisations supporting the project include the National Park, Moors for the Future, the Forestry Commission and the Woodland Trust, who recently pointed out that the UK is nowhere near its target of planting 11 million new trees between 2015 and 2020, and that planting needs to increase even more to bring England’s paltry 10% tree cover closer to the 38% average in Europe.

“A lot of tree planting we see at the moment is on a much smaller scale, the size of a tennis court for example, so it’s really important to see a ‘landscape scale’ project like this in a National Park, particularly when the country is not meeting its tree planting targets,” says Doug Edmondson of the Woodland Trust, adding that the new clough woodlands will provide better habitats for native wildlife, and allow birds, animals and insects to spread out by linking woodland ‘corridors’.

“These new woodlands will clean the air blowing in the direction of Sheffield, and help the Peak District work as a pair of lungs for the wider area,” says Tom Harman, adding they’ll also stop peat eroding and releasing carbon, and reduce flood risks by soaking up water and slowing down river flow. But for many, the aim is to repair years of damage from erosion and overgrazing.

“We hope in a few years today’s children can bring their kids and find woodlands that look like they’ve always been here, with butterflies, wood warblers, redstarts, buzzards and all kinds of animals, from lizards to deer,” says Tom.

“We’re already seeing woodland plants like wood anemones returning that for years were grazed so you’d never see them flower.”