£1,000 donated to charity after tree felling 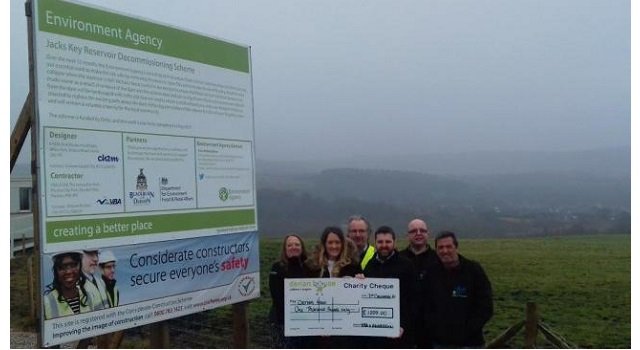 Environmental workers cutting down trees at a reservoir hatched a plan to raise money for Derian House Children’s Hospice.

A cheque for £1,000 has been given to the Chorley-based hospice after staff removed 100 trees from Jacks Key Reservoir site in Darwen, to prevent a risk of flooding.

The money was raised after tree surgeons D Riding Ltd ‘bought’ the remaining logs on site for a donation of £250 to Derian House, which was matched by VolkerStevin and sub-contractors D Wardle and Thomas Contracting.

Site agent Ian Bolt said: “The dams were originally built for use in the paper industry, for pulping and bleaching.

“The main reason for the dams to be removed was due to flood risk. Inspections had shown that if the dam was ever to retain water to its height, there would be a risk it could fail, causing a wall of water to run down the valley and cause significant damage to properties in its path.

“In order to enable works, a number of trees growing on the dam had to be cut down so VBA, a joint venture comprising of VolkerStevin, Boskalis Westminster and Atkins, could remove the material and form the new river.

“More than 100 trees were removed from site, however there have been many trees planted as part of the environmental and planning conditions to compensate.”

Georgina Cox, chief executive of Derian House Children’s Hospice, said: “The devastating floods that hit many parts of the North West last winter show just how important this type of environmental work being carried out by VBA can be.

We would like to thanks VBA and its contractors for their generous donation.”