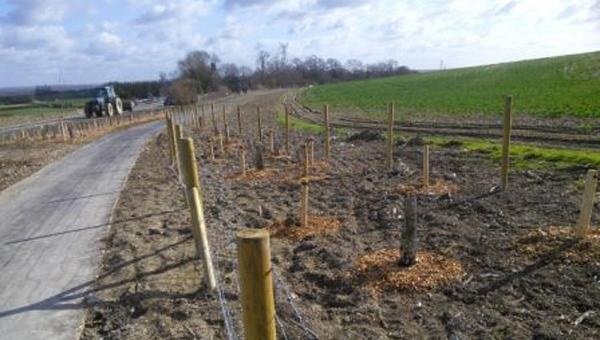 Sapling snatchers made off with one hundred young trees along the edge of a new cycleway in a “senseless act which cost the taxpayer money”.

Thieves made off with hornbeam, rowan and field maple trees at the new cycle track between Lewes and Ringmer in two raids in one week.

The trees were planted by forestry firm Bonny’s Woods as part of an East Sussex County Council project.Matthew Stuart, the company’s owner, estimated the crooks caused approximately £1,000 worth of damage.

He said: “It has been quite a big project and we have been doing the landscaping and have planted in the region of more than 3,000 trees. Last week we had about 50 stolen and over the weekend they took another 50.

“It all seems quite specific, almost like it is one person stealing them to order. They have cut the trees and tree ties.

“This is a community project which has been really well received by the general public – so the people will lose out.”

The trees were stolen from near the boundary with the Ringmer Parish and the new fencing has also been damaged.

East Sussex County Council will be working to replace the trees and Sussex Police are looking for the culprits.

A spokesman for the council said: “We are extremely disappointed that someone has chosen to steal trees from the Lewes to Ringmer Cycle Way, particularly as whoever has taken these trees has ripped them from the ground, meaning they have probably killed them in the process.

“This was a senseless act which has cost the taxpayer money and we hope those responsible face action for the offence.”

The first incident occurred on the evening of March 23 or March 24 and the second happened on Sunday.

Anyone who has witnessed suspicious activity along the route, which runs alongside the B2192, or is offered or sees similar trees for sale in unusual circumstances, is asked to email 101@sussex.pnn.police.uk or call 101 quoting serial 294 of March 30.