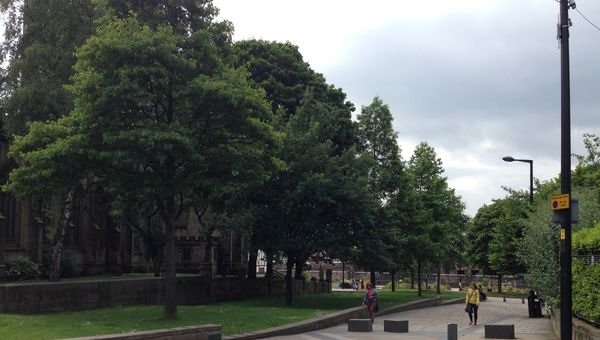 As Dig the City prepares to turn our city streets green this August with the free festival of show gardens, celebrity gardener talks, flower markets and family things to do, we’ve teamed up with arboriculture, landscape and ecology experts Urban Green to take an alternative look at the city and see the green among the grey!

Did you know there is a tree in the city centre that’s actually named after Manchester? And it’s also the most endangered native tree in Britain. Or how about the unusual group of six trees that survive against the odds around Manchester Cathedral?

There are many trees that continue to thrive in our urban environment right here in the heart of Manchester. Here’s a list of 10 city centre trees to check out ahead of Dig The City plus a map of the whole tree trail.

Next time you’re in the city centre, take a break from the buildings and give the green a go…

The Manchester Poplar is one of only two trees which is named after a city, the other is the London Plane (Platanus x hispanica). Both named after their respective cities as they are two of the few trees which are able to survive in the most polluted conditions, and are found in the two greatest cities of the Industrial age. The Black Poplar or Manchester Poplar is the most endangered native tree in Britain.

This is a fine example of a group of willows in their natural waterside environment. People have taken advantage of the medicinal properties of willow trees since ancient times (as early as 400 BC). Chewing on willow bark was said to be an effective way of treating fever and inflammation. This is because the bark contains salicin, which is a chemical similar to the active ingredient in aspirin – acetylsalicylic acid.

A good example of modern landscape architecture and an imaginative species choice. When he once spotted it on a tour of the United States in the 1860s, Prince Maximilian of Austria judged it the most beautiful of trees.

Here is a good example of a linear monoculture group lining the canal edge and narrow cobbled street giving character and shading to a popular and vibrant street scene. Also known as the Black Locust, the name locust is said to have been given to the Robinia by Jesuit missionaries, who thought that this was the tree that supported St. John in the wilderness, but it is native only to North America. The locust tree of Spain (Ceratonia siliqua or Carob Tree), which is also native to Syria and the entire Mediterranean basin, is said to be the true locust of the New Testament.

These are impressive specimens with an exciting future growth potential which is very unusual in city centres. The earliest redwoods showed up on Earth shortly after the dinosaurs, before flowers, birds, spiders and, of course, humans. Redwoods have been around for about 240million years.

A striking example of a large street tree being successfully retained in close proximity to buildings. Its positioning blends and softens the architecturally old and the new. A single urban tree is capable of removing 21.8kg (48ld) of particles such as black carbon (soot) and diesel matter from the air every day.

The largest example of its species in the city centre. In Norse mythology the tree of life was an Ash tree called Yggdrasil which grew on an island surrounded by the ocean and its trunk reached up to the heavens, and its boughs spread out over all the countries of the Earth.

An unusual group demonstrating the wide variety of species that can succeed in urban areas. It will be interesting to see which trees prosper with potential future climatic changes.

An impressive flowering species within green space setting. The Roman general Lucullus is said to have committed suicide in 56BC when he realised he was running out of cherries. Lucullus had introduced cherries to Europe in 72BC and named the cherry tree ‘Cerasus’ after a town of that name in what is now Turkey. The world record for spitting a cherry pip is 93ft 6.5in, set by Rick Krause of Michigan in 2003.

Although the Indian bean tree grows best in full sunlight and with moist soil, as its Brazenose position shows it is quite adaptable and has flourished almost everywhere it has been introduced. The Indian bean tree is the only source of food for the Catalpa sphinx moth. Its caterpillars can completely strip a tree – but also make good fishing bait. Some anglers even plant themselves a bean tree orchard to guarantee a ready supply.

The Top 10 Urban Trees in Manchester list was compiled by Urban Green, a Manchester based multidisciplinary consultancy that offers a wide range of environmental services, specialising in Landscape Architecture, Arboriculture and Ecology. Go to www.urbangreen-space.co.uk for more information.